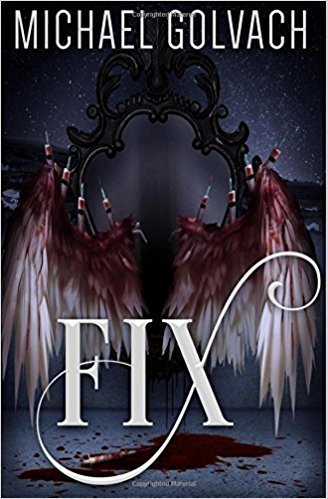 Book Synopsis: Happily ever after. The hard way.

David Fitz is a small time drug dealer and con artist who funds his habits and that of his girlfriend, Juno, through drug sales and petty crime. Both are eager to get clean and start a new life, far away from the dangers of the city.

They hatch a plan, with an ambitious police officer, to provide evidence against David 's boss. Together they will bring him to justice in return for witness protection. It sounds simple enough, but as soon as they kick their habits Juno gets cold feet. She decides that she no longer wants to rat on David 's boss, or to be a part of David 's life anymore, though she knows that staying together is the only way to stay alive and that the original plan will have to be carried out.

Things get even worse when the cop they are working with leaves them in the middle of nowhere, with no money, no real protection and no long-term plan.

When David 's boss is released on bail after just 24 hours they know he will soon be after them. And when he phones them at their new home, they find that there is yet another twist in their already complicated situation.

In their seemingly nice new neighbourhood, David and Juno befriend Cadence and Brent. The couple seem friendly enough, but why are they so keen to help when they themselves could face untold dangers?

With ever dwindling options, and David 's boss closing in on them, he and Juno are forced into trusting their new neighbours with their lives. Their strange alliance has to be better than the certain death they are facing if David's boss finds them

Then again, it could be much, much worse

Ever since I was able to read, I 've had a book (or a comic book in the early days) in my hands or on my person. I grew up in a non-digital age, in a home with one telephone that everyone shared, one television that no one watched, and in which movies were a luxury. Aside from radio theatre, books were my best non-human friends.

My love of reading never died. When I was 8 years old, I drew my first series of comic books. They were terrible, but I still love them. To me, they represent the moment the wise-old-man inside my little boy 's head finally made me aware that I loved to create.

As it turned out, I enjoyed writing much more than I enjoyed drawing, but I 've spent most of my life doing some form of creative work. And when not, I 've worked some boring jobs in very creative ways.

To this day, I love to write and to share my creations with others. I 'm the guy who will watch a good movie twenty more times, if it means I get to introduce it to someone else and participate in their joy of discovering something entertaining or valuable. I can 't be quite so intimately participatory with my own writing, but I do love to know that I 've brightened someone 's day, made them think, feel or ”at the very least ”provided them with a welcome distraction for a while.