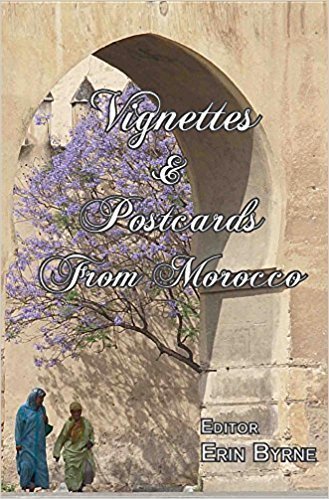 Book Synopsis: As the chergui (desert wind) whips reality into fantasy and the perpetually full tea glass caresses its minty bouquet, from Casablanca to Tangier, from the crush of Marrakech to the ethereal solitude of the Sahara, from a rose festival in the countryside to a betrothal fair high in the Atlas Mountains, in alleyways and on rooftops, in the souks and on plains scattered with ruins, we invite readers to join us as we rotate in a dervish-dance with Morocco.

Edited by Erin Byrne, thirty-three stories and poems”written by Suzanna Clarke (A House in Fez), Jeff Greenwald, Michael Chabon, Phil Cousineau, Paul Bowles and others”vibrate inside this book, tales of quests and mysteries, of traditions and memory and wisdom that seek the ancient and celebrate the exotic in Morocco. Photos by Omar Chennafi, Siddharth Gupta, sketches by Anna Elkins.

Author Bio: Erin Byrne is the author of Wings: Gifts of Art, Life, and Travel in France, editor of Vignettes & Postcards from Paris and Vignettes & Postcards from Morocco, and writer of The Storykeeper film. Her work has won numerous awards which include three Grand Prize Solas Awards for Travel Story of the Year, the Reader's Favorite Award, Foreword Indies Book of the Year, and an Accolade Award for film.

Erin has taught writing at Shakespeare and Company Bookstore in Paris, at Book Passage, Sausalito, and on Deep Travel trips. She is host of the LitWings event series at Book Passage, Sausalito, which features internationally well-known writers, photographers, and filmmakers. Erin hosts literary salons in the Bay Area and Paris, and is on the Board of Advisors of Litcamp, the renowned juried writers' conference.

Erin is working on Illuminations, a novel set in the Ritz Paris during the occupation, her screenplay Siesta is in pre-production in Spain, and she will teach Deep Travel Andalusia, In Search of Duende, in the caves of Granada in March, 2018. www.e-byrne.com.