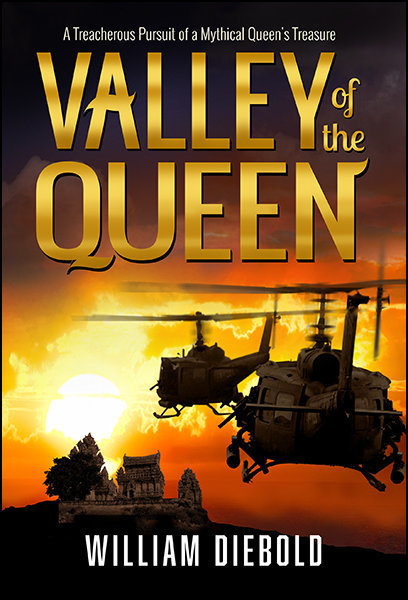 Valley of the Queen - Adventure

Book Synopsis: An ancient queen buries a treasure near a Cham temple in Vietnam. Later she goes missing and her people (Champa) still long for her after one thousand years. In modern times an investigative television reporter, Catherine Marsh, uses her resources to investigate an Asian economic magnate who apparently profited from the Vietnam War. She has helping her in her investigation a Vietnamese refugee, Mai Sambath, who discovers that she is the rightful heir and queen of the ancient Champa throne. They meet an advertising photographer, Jack Largent, who was also a photographer in the Vietnam War and knows something of the area where the magnate came from, and where the temple near the buried treasure is located. Jack and Mai fall in love and take up living together. Catherine has an affair with Jack's assistant Kelly, and they also form a relationship. They travel to Vietnam where Mai discovers the lost treasure when no one else could, confirming she is the rightful heir. She is kidnapped by the evil magnate, drugged and taken to his secret valley, and presented to the Champa people as their long lost queen. He plans to use her people as a ready-made army to overthrow the government and take power. Jack works with the Vietnamese to rescue Mai and the evil magnate is killed and the valley destroyed as they escape. When Mai is drugged she senses the ancient queen (who is of part alien-part human birth) talking to her. She later recovers a ring from the ancient treasure left by the queen that allows her spirit to join with Mai without the drugs. In the end the friends surprise Mai and make plans to restore the valley paradise so she can return to live with her people in peace.

Author Bio: William Diebold is an author living in Southern California. He did three tours in Vietnam, spending two years and three months as a photographer from 1969 to 1971. Following that, he graduated ArtCenter College of Design and worked for 25 years as an advertising photographer with studios in Chicago and Dallas. He was fortunate to enjoy success during those years, with many major clients such as Kellogg's, Little Caesars, Pillsbury, Bud Light, Quaker, Sam Adams, and Pepsi. Writing is something that he always intended to do but never found the time until he retired from advertising photography and took up his dream. He has written and self-published two books (Valley of the Queen, and the sequel, Palace Secret). Within that advertising experience is a professional graphics background allowing him to create his own ads and websites for his books and self-promotion. William Diebold's website can be found at www.debold.com (note the different spelling of his name). There you will find many Vietnam and advertising photographs that mirror some of the opening chapters in Valley of the Queen.