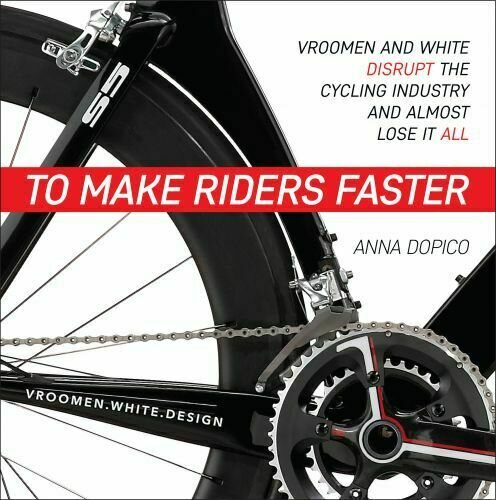 
Book Synopsis: To Make Riders Faster tells the inspirational story of two students who took their company, Cervélo Cycles, from a school basement project in Montreal, Canada, to their bikes winning in the Tour de France, the Olympics and Ironman. Phil White and Gerard Vroomen built the most sought-after brand in the cycling world in less than a decade.

The story is told by the wife of one of the co-founders who witnessed the two live like paupers and build the world-renowned brand from nothing. Vroomen and White revolutionized cycling design with the release of their full-aero road bike. They performed wind tunnel testing and applied an engineering focus for rider performance which distinguished them from the outset. They achieved a cult-like following from customers and market demand multiplied year over year. The successes brought the highest of highs but the challenges brought the lowest of lows eventually taking its toll on the founders.

The book begins with Vroomen and White meeting at McGill University in 1995 and takes the reader, on a wild ride of success and setback culminating with the sale of their company in 2012. The book shares cycling stories, business stories, engineering stories and personal stories.

To Make Riders Faster is a 256-page hardcover book with the story woven through words, pictures and quotes - a unique combination coffee-table book and business biography. It includes an Afterword by Phil White, co-founder.


Author Bio: Anna Dopico never imaged herself as a writer but felt compelled to write Phil and Gerard’s story. She wanted anyone who read the book to enjoy and learn from the story of two students who decided to build a company and succeeded against the odds. Anna had an insider’s view. She was not only Phil’s spouse but a business person and provided Cervélo a home in the early years. She became a business advisor and in the later years, worked for the company. She spent three years writing the Cervélo story and interviewed employees, partners, suppliers, customers and athletes for their insights and perspectives.