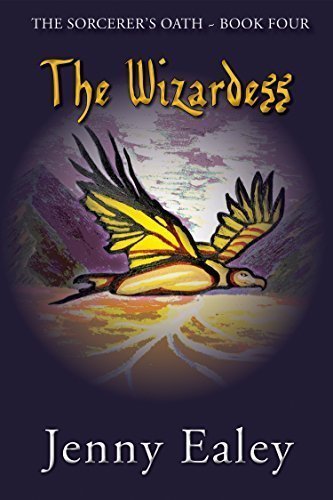 The Wizardess: The Sorcerer's Oath - Fantasy

Book Title: The Wizardess; Book 4 of The Sorcerer's Oath

Book Synopsis: As the showdown between them looms, King Kosar and Prince Jarand use forest fire, subterfuge, clandestine troops and poisoned parchment to vie for the exiled Prince Tarkyn 's support. The Wizardess of the Lost Forest emerges from her woodland home to fight with Tarkyn in a last desperate attempt to stave off civil war, but she holds secret knowledge that shocks and angers him when it is revealed.

With his wizard 's words ringing in his ears that he may not like the way he succeeds, Tarkyn must make a choice that will affect the fate of both woodfolk and sorcerers.

Author Bio: Jennifer Jane Ealey was born in outback Western Australia where her father was studying kangaroos on a research station, one hundred miles from the nearest town. Her arrival into the world was watched, unexpectedly, by their pet kangaroo who had hopped into the hospital. Having survived the excitement of her birth, she moved firstly to Perth and then Melbourne where she spent most of her formative years. She took a year off to ride a motorbike around Australia before working as a mathematics teacher and school psychologist in England and Australia, a bicycle courier in London and running a pub in outback New South Wales.

She now lives in a country town just outside Melbourne, working by day as a psychologist and beavering away by night as a novelist. She has written two (awful) detective novels and has just completed The Wizardess, the fourth and final novel of The Sorcerer 's Oath series.