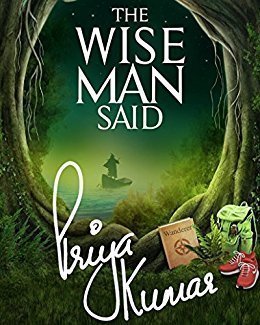 Book Synopsis: Sammy is an 80 year old billionaire, who finds himself at the peak of his success built on a mountain of sacrifices. He decides to participate in a life he missed to live. Eleven months in a year he leaves behind his identity and money and allows his curiosity and his willingness to experience anything ”death even, to take him on life changing adventures and experiences across the world. Loaded with wisdom, surprise, humor and an eagerness to embrace life, The Wise Man Said is a collection of twelve such adventures of Sammy, where his journey becomes his greatest achievement ”a life well lived.

Author Bio: Priya Kumar is an Internationally Acclaimed Motivational Speaker and Bestselling Author of 10 Inspirational Books. She had worked with over 800 multi-national corporates across 40 countries and has touched over 2 million people through her workshops and books, and is the only Woman Speaker in India to have done so. She is the only Indian Author who has won 14 International Awards and 3 National Awards for her books.

She is also known as The Biography Specialist. Priya is currently penning the official biography of Mr. Pullela Gopichand who is the Olympics Badminton Coach, having delivered world champions in the sport. Priya wrote the biography of Late Shri O.P. Munjal, the founder of the Hero Group and Subhashish Chakraborty, the founder of DTDC, which made it to the most popular biography of 2015 on Amazon.

Turned Film Maker and Director, Priya is all set to bring her stories to the silver screen, with œI Am Another You , her first book as her debut feature film.