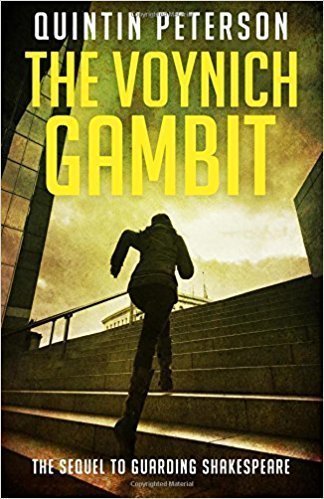 Book Synopsis: Special Police Officer Lt. Norman Blalock, who has been guarding the treasures of the Folger Shakespeare Library for 25 years, has been coerced into a plot to heist from the Folger Museum œthe most mysterious book in the world,  the Voynich Manuscript, on loan from Yale University. Under threat of suffering the consequences of their involvement in the botched plot to heist another priceless artifact from the Folger underground bank vault several months earlier, Blalock and his partner-in-crime Kavitha Netram are once again under the thumb of nefarious businessman Rupert Whyte, and have no choice but to play along.

Author Bio: Native Washingtonian Quintin Peterson is a retired D.C. police officer who served the public for three decades. He is an artist and critically acclaimed crime fiction writer who has authored four DC-based crime novels, a book of poetry, and has contributed to six crime fiction/noir anthologies, including DC Noir, edited by George Pelecanos. He also has contributed to the British horror magazine SANITARIUM and to Heater Magazine (formerly known as eNoir). His latest offering is the noir mystery thriller The Voynich Gambit, the sequel to Guarding Shakespeare, another plot to heist a priceless artifact from the Folger Shakespeare Memorial Library in Washington, D.C.