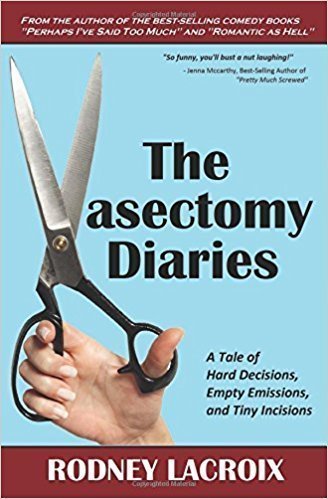 "This is a GENIUS book. You guys have to pick this up." - Jenny McCarthy, from "The Jenny McCarthy Show" interview with Rodney Lacroix on June 15, 2017

From the best-selling humorist and comedy author of "Perhaps I've Said Too Much" and "Romantic as Hell."

Written in Rodney's trademark comedic style with spot-on timing, "The Vasectomy Diaries" is a hilarious, frank and hysterically wince-inducing account of one man's journey through the procedure.

Rodney takes you along with him on his quest to shoot blanks with a fast-paced, brain-storming diary format. Starting with the moment he makes the life-changing decision while experiencing a migraine during a kid's birthday party, all the way through to the final reveal on whether or not the damn thing took, it's a fun and racy ride.

Follow his progress in this day-by-day journal as he discusses and describes in full comedic (and graphic) detail such things as:

- The decision to empty the pistol chamber

- The vasectomy consultation, and why it sucks

- What a vasectomy is, wonderfully described using cars, factories and hair dryers

- Manscaping for beginners, and the perils of putting a sharp razor on bumpy bits and pieces

- The procedure itself, and why it sucks

- How frozen peas can replace a dog as man's best friend

- Some Not-Safe-for-Work reading on post-vasectomy "chores"

Punctuated with some amazing illustrations, "The Vasectomy Diaries" is a feast for the eyes, as well. It's a great read for any man who is thinking of the procedure, any man that has had the procedure or just anyone who wants to laugh at another man's pain.

Think of it as "What to Expect when You're Expecting a Procedure to make Women You Sleep with Stop Expecting."

Sit down, relax and a get ready to laugh as Rodney Lacroix tells a tale in a way only he can. Trust me, it's not your average diary.

You'll laugh your balls off.

Rodney Lacroix has been writing about his misadventures for years. He's done stand-up comedy, emceed charity events and has hung out with many celebrities.

Rodney's books have won him multiple humor awards and have appeared on international best-seller lists. He is worshipped in most third-world countries and is known as "El Chupacabra.' Perhaps you've heard of him.

Maybe you shouldn't believe anything he says. DO read his books, though. He's hysterical.