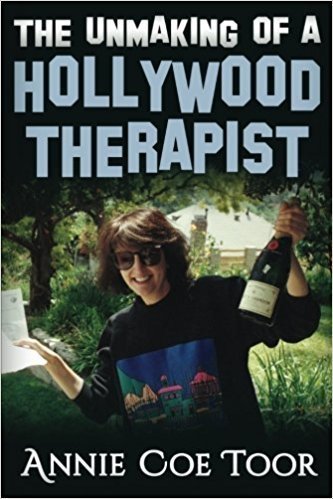 The Unmaking of a Hollywood Therapist - Memoir

Book Title: The Unmaking of a Hollywood Therapist

Book Synopsis: British-born Hollywood psychotherapist Annie Coe Toor, at the zenith of a successful career as a specialist in stress in the entertainment industry, stops to have a drink with a friend one night, and while driving home, she is stopped by the police, arrested for drunk driving (her first ever), and sent to jail for the night. This event catapults Annie into a three-year struggle with the California court system and with her over-reaching psychotherapy licensing Board. The over-the-top "punishments" for her crime put a strain on her marriage and health, cost her thousands, and threaten her beloved career that took her years to achieve. When she has met all the requirements and paid all the fines -- when she is just beginning to think she can see the light at the end of the tunnel -- her licensing board decides to add on two additional years of probation which include restrictions that are not much different from those she'd already been dealing with. Annie is now confronted with a choice: Go through two more years of hell in order to hold onto her license to practice psychotherapy -- or quit and get her freedom back? Just when is the price you have to pay to hold onto something too high? This is the question Annie faces at the end of The Unmaking of a Hollywood Therapist. A true story.

Author Bio: Born in England, Annie Coe, from the age of ten, dreamed of living in California. She finally immigrated to Los Angeles in 1965, working in pharmaceuticals and then in the movie industry where her first job was as the assistant to the genius director, Orson Welles. From there, Annie went on to other movie industry positions in story analysis, development, and for eighteen months worked on the production of the hit film, Flashdance. After a tragic loss, she sought grief counseling, which led her into what would become her new passion, a career as a licensed psychotherapist. After spending years obtaining the necessary degrees, credentials, and internship hours, and writing her master 's thesis on the psychological stresses of working in films, she finally opened her private practice in Hollywood, specializing in the entertainment industry. She became well-known as an expert in that field, and gave many radio and television interviews on industry œstress.  In addition, Annie spent a great deal of her time doing volunteer work, including crisis counseling for the Red Cross when hurricane Katrina hit New Orleans. She married Bruce Toor, an attorney, in 2000.