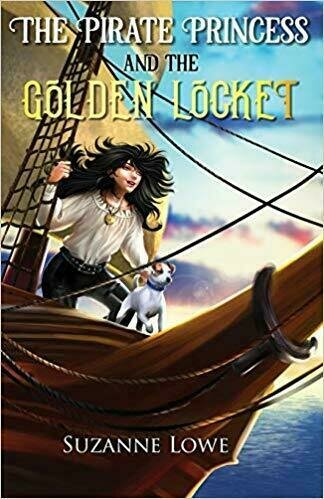 The Pirate Princess and the Golden Locket - Pre-Teen Fiction

Book Title: The Pirate Princess and the Golden Locket


Book Synopsis: The first thrilling tale of adventure, friendship and discovery in the Pirate Princess series.
Meet Lotty, the brave, young orphan whose life is about to change forever. When Lotty is cast out from the Sevenoaks home for children, she meets Mr Jacks, a lovable and very cheeky little dog with attitude! Together they encounter ruthless pirates, hidden treasure and discover the truth about Lotty's golden locket.A story full of excitement and adventure, filled with friendship, humour and pirates! Young readers who enjoy adventurous tales filled with loveable characters and plenty of twists and surprises will love The Pirate Princess and the Golden Locket. Follow Lotty and her little dog Mr Jacks on their adventures on the high seas.


Author Bio: Suzanne was born in Perth Western Australia and as a young adult grew up in the small country town of Tom Price situated in the outback of Western Australia. Her current home is in Perth with her husband, two daughters and cat Abby.
Suzanne has a Bachelor of Science Degree, and her interests include watching movies, travelling, photography and reading. She also enjoys going to the occasional comic book convention!
Suzanne has an adventurous spirit and has had the opportunity to experience many exciting adventures including swimming with Whale Sharks on Ningaloo reef, climbing to Mt Everest base camp in Nepal, descending into one of the pyramids at Giza in Egypt, flying in a hot air balloon over the Valley of the Kings, parachuting from a plane at 12000 feet in York, Western Australia and sitting on the edge of an active volcano on Tanna island in Vanuatu!

Suzanne has won the award for best Sci Fi/Horror in an e-book in the New Apple literary awards for her YA novel Seventeen and received a bronze medal from Readers' Favorite International writers’ literary competition for her children’s novel The Pirate Princess and the Golden Locket. In 2020, she was presented with a Book Excellence Award in Pre-Teen Literature for the Pirate Princess and the Golden Locket and nominated for best children’s book in the 2020 Top Shelf Awards
Suzanne is a member of the Society of Children’s Book Writers and Illustrators, the Travel Writers Association, Australian Society of Authors and the Australian Science Fiction Society.
Her published works include;
Seventeen, book one in the Seventeen Series. A YA dystopian adventure story set in Australia.
Rage, book two in the Seventeen Series.
The Pirate Princess and the Golden Locket, a pirate adventure story for middle grade children
Suzanne’s author website is www.Suzanneloweauthor.com