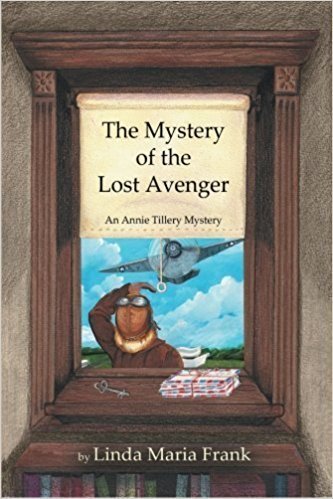 The Mystery of the Lost Avenger - Mystery

Book Title: The Mystery of the Lost Avenger

Letters can really change a life. In Linda Maria Frank 's latest Annie Tiller Mystery, teen detective and her boyfriend, Ty Egan, bump into the intrigue of a past time in American history.

The wreckage of a World War II plane is found in the mountains of Appalachia. It mysteriously

crashed in 1943 on its way to a naval base. Inside the plane is a note, written by Annie Tillery 's great grandmother,

Charlotte, who was in love with a fighter pilot. Young Charlotte tested the planes and flew them to naval bases; her fiancÃ© flew the planes in battle.

While investigating the crash site, NCIS finds the note in the plane, which they trace to Charlotte and then to her surviving family members, Annie and her mother Carol. The mystery begins. Why did the plane crash, and what does Charlotte 's note mean? Annie and her mother decide to dig into Great-Grandmother 's past by way of the aged family attic.

There, they find love letters written by Charlotte and her Navy pilot fiancÃ©. There is a code to be broken

in those letters, a hint of sabotage, and The Mystery of the Lost Avenger to be solved. As they explore, Annie suspects

Charlotte 's ghost is reaching out to tell her something, but what? She enlists the help of her boyfriend,

newly licensed pilot Ty Egan, but Annie feels she may be the key to her great-grandmother 's top-secret life.

After many years in the teaching profession, Linda Maria Frank, the author of Annie Tillery Mysteries, has launched a new career. Inspired by a childhood passion for the Nancy Drew series and the popular television series, CSI, she successfully married an appealing heroine (Annie Tillery) with gripping story plots to create these new fiction books for mystery readers.

THE MADONNA GHOST has earned the distinctive œEditor 's Choice  and œRising Star  awards. GIRL WITH PENCIL DRAWING, the second book in the series, ramps up the adventure and suspense. Annie stays one step ahead of the bad guys by the skin of her teeth.

The Annie Tillery Mysteries are available in paperback, e-book, and digital audio.

Before venturing into writing, Frank 's first love was teaching science, her assignments ranging from Middle School to graduate level courses at Hofstra and Adelphi Universities. She was the science chairperson for the last five years of her career in the public schools. She was awarded teacher of the year in Seaford High School in 1989. She won an award from the American Association of University Women for her ability to inspire young women to pursue careers in science. It was the forensic science courses that gave her the story lines for her heroine, Annie, who is based on a composite of former beloved students.

She recently retired from Adelphi University where she supervised science student teachers. To quote, œWriting, publishing, and marketing books is a full time job, and it 's time to change careers. 

Today she collaborates with children 's author, Karen Bonnet, to do presentations about their books and their journeys in self-publishing. Linda and Karen give a portion of the proceeds from their books to the Interfaith Nutritional Network, and are planning a series of programs for the Boys and Girl Club.

Presently Frank is involved in a project at LTV in East Hampton called œThe Writer 's Dream , an interview show where authors discuss the many different aspects of the profession. The show is aired on Cablevision 20. She collaborates with Lois W. Stern on her writing contest, Tales2Inspre. Frank is also the events coordinator for Long Island Authors Group, and is a member of Long Island Children's Writers and Illustrators, and Sisters in Crime(SinC).