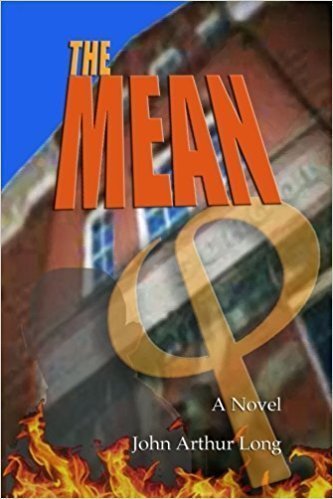 Book Synopsis: Told with elements of heartrending pathos, nerve-wracking tension, and scenes of disarming humor, The Mean is a riveting novel of school days that looks at the nature of true learning, the best and worst in public education, the drama of human relationships, and the threat of violence that has become such an integral part of our lives.

With a supply of sarin nerve gas as well as explosives and automatic weapons, members of a radical group who believe they have been betrayed by a high-level Middle East negotiator decide to seek revenge by attacking a Long Island high school attended by the negotiator's daughters. It is against the horrific shadow of this approaching attack that The Mean reveals the inner conflicts of Central High School through the humorous, sometimes sardonic, viewpoint of the school's assistant principal Brian Scarlucci as he deals with daily school issues, like an angry student leaving fecal deposits around the school, and a Mafia captain who tries to pay Scarlucci a huge amount of cash to make up for the crime figure's son's bad school behavior.

Scarlucci must also come to the defense of his best friend, a black English teacher named Ken Valentine, who is being brought to task for teaching meditation in his classroom while students listen to a recorded soundtrack of sacred Tibetan gongs on iPads because Valentine believes the tones can open their minds to the true learning of the Golden Mean. Unfortunately, before discipline can be taken, one of Mr. Valentine's female students commits suicide while listening to the meditation tape, and Scarlucci must summon all his skills to defend Valentine against what he knows are false charges.

It is in the midst of all these school-day conflicts and more that Scarlucci is suddenly confronted by an unimaginable horror as the terrorists arrive, capable of bringing death to all those in Central High on the meanest day of all.

Author Bio: While spending a full, rewarding career teaching English, Creative Writing, and assorted Drama courses on the high school level in public education, Mr. Long has also pursued a professional writing career that has resulted in several successfully published novels. His first novel, THE SIGN OF THE GUARDIAN was published in two separate editions and optioned twice for motion picture production for which Mr. Long co-authored the screenplay. EVE OF REGRESSION, Long 's second novel about the search for the grave of the first woman in an African safari adventure, has been translated into several different languages, distributed worldwide as a bestseller and was recently re-issued as a Kindle book titled THE GATES OF EDEN. Mr. Long also authored THE HARVARD MAN, a hard-hitting crime novel about a rejected applicant who becomes obsessed with destroying the esteemed Ivy League university. Long 's most recent publication, THE MEAN, is a contemporary novel that looks at the nature of true learning, the best and worst in public education, the drama of human relationships, and the threat of violence that has recently become such an integral part of our lives. Mr. Long also performed as the narrator for the audiobook edition of The Mean which was nominated as a finalist in the Voice Arts Awards in the categories of Author Performance and Mystery novel.