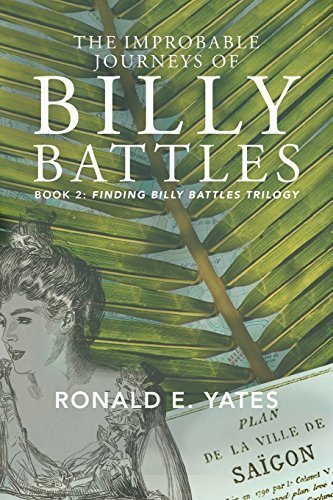 Book Synopsis: Billy Battles is definitely not in Kansas anymore.

As Book 2 of the Finding Billy Battles trilogy opens, Billy is far from his Kansas roots ”and his improbable journeys are just beginning. He is aboard an ocean liner sailing to the Mysterious East (Japan, Hong Kong, French Indochina, and the Philippines), among other places.

The year is 1894 and aboard the S S China Billy meets a mysterious, dazzling, and possibly dangerous German Baroness, locked horns with malevolent agents of the German government, and battled ferocious Chinese and Malay pirates in the South China Sea. Later, he is inadvertently embroiled in the bloody anti-French insurgency in Indochina “which quite possibly makes him the first American combatant in a country that eventually will become Vietnam.

Later, in the Philippines, he is thrust into the Spanish-American War and the anti-American insurgency that follows. But Billy 's troubles are just beginning. As the 19th century ends and the 20th century begins, he finds himself in Mexico and Europe entangled with political opportunists, spies, revolutionaries and an assortment of malicious characters of both sexes. How will Billy handle these people and the challenges they present?

Author Bio: Ronald E. Yates is an author of historical fiction and action/adventure novels, including the popular and highly-acclaimed Finding Billy Battles trilogy. His extraordinarily accurate books have captivated fans around the world who applaud his ability to blend fact and fiction.

Ron is a former foreign correspondent for the Chicago Tribune and Professor Emeritus of Journalism at the University of Illinois where he was also the Dean of the College of Media.

Ron has been a presenting author at the Kansas Book Festival and the Los Angeles Times Festival of Books, among other venues. He is also the author of The Kikkoman Chronicles: A Global Company with A Japanese Soul, published by McGraw-Hill. Other books include Aboard the Tokyo Express: A Foreign Correspondent's Journey through Japan, a collection of columns translated into Japanese, as well as three journalism textbooks: The Journalist's Handbook, International Reporting and Foreign Correspondents, and Business and Financial Reporting in a Global Economy.

Before leaving the world of professional journalism where he toiled 27 years, Ron lived and worked in Japan, Southeast Asia, and both Central and South America where he covered several history-making events including the fall of South Vietnam and Cambodia; the Tiananmen Square massacre in Beijing; and wars and revolutions in Afghanistan, the Philippines, Nicaragua, El Salvador and Guatemala, among other places.

His work as a war correspondent resulted in several awards, including the Inter-American Press Association's Tom Wallace Award for coverage of Central and South America; the Peter Lisagor Award from the Society of Professional Journalists; three Edward Scott Beck Awards for International Reporting, and three Pulitzer nominations.

Ron is a proud graduate of the William Allen White School of Journalism at the University of Kansas and a veteran of the U.S. Army where he served in the Army Security Agency.