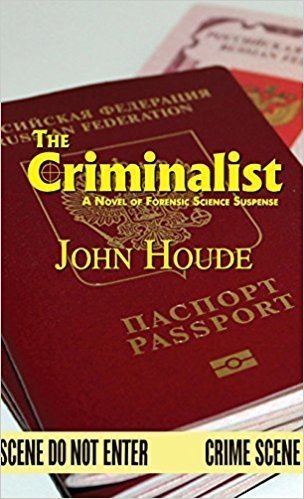 Book Title: THE CRIMINALIST A Novel of Forensic Science Suspence

Book Synopsis: In his job as a top-level forensic scientist, Paul Connert combs through scenes of violent death that daily remind him of a guarded secret “ a secret guilt over his fiancÃ©e's gruesome death from a drug overdose. Suddenly Paul's world is rocked by the beautiful Vika Koslava who reminds him of his lost fiancÃ©e. Vika is a Russian model recently arrived in the US with her sister for an erotic photo shoot. But the photo shoot goes bad, and Vika's sister goes missing. As the twisty plot unfolds, Paul and Vika join forces to find her, hatching a risky plan to stop a deadly sex trafficking ring before Vika meets the same fate as her sister. The Criminalist is a thriller about forensic science at its best “ it 's all about tight teamwork, but can everyone on Paul 's Crime Lab Team be trusted?

Author Bio: John Houde, B.S., D.A.B.C., is the author of several books including the highly authoritative Crime Lab: A Guide for Nonscientists. He is a board-certified, twenty-five-year veteran criminalist whose articles have appeared in such publications as The CACNews and the Journal of Forensic Sciences. John has spent much of his career educating juries, investigators and attorneys in various topics of forensic science. His specialty areas include the analysis of narcotics, trace and fire debris evidence. John lives in Washington State.