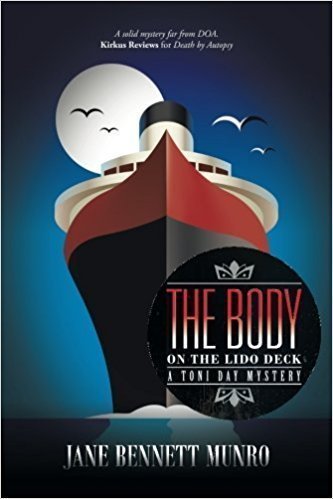 The Body on the Lido Deck - Mystery

Book Title: The Body on the Lido Deck: A Toni Day Mystery

Book Synopsis: Twin Falls pathologist Toni Day is on a Caribbean cruise with her husband and parents when she is jerked out of a peaceful slumber by a horrific scream. After several unsuccessful attempts to reclaim sleep, Toni heads to the ship 's deck to read. But shortly after the sun rises, everything changes when a mangled body plummets from the roof into the pool next to her.

Rather than flee in horror, Toni teams up with her stepfather, Nigel, and Scotland Yard to investigate the murder, despite resistance from the captain and the Royal Barbados Police. With just three days left in the cruise, Toni and Nigel must work fast, especially when two more bodies are discovered and a crew member is fatally injured. As Toni delves into the histories of crew members, she uncovers mysterious connections that lead back nearly three decades. Finally, with only one night remaining, Toni and Nigel must set a trap in a last ditch attempt to find the killer before one of them becomes the final victim.

Author Bio: Jane Bennett Munro, MD, has been a hospital-based pathologist for nearly forty years, twenty-four of them as a solo pathologist at Twin Falls Clinic & Hospital, during which time she did coroner 's autopsies for Gooding, Lincoln, Cassia and Minidoka Counties. Now semi-retired, she works at St. Luke 's Magic Valley Regional Medical Center. She also spent 8 years on the Idaho State Board of Medicine and was chairman 1997-1999.

Her first novel Murder under the Microscope received a 2012 IPPY Award; Too Much Blood won a 2014 Feathered Quill Award, and was a finalist for the 2014 Indie Excellence Award. Her 4th Toni Day mystery, Death by Autopsy, has won a 2015 Feathered Quill Award. She is also the author of Grievous Bodily Harm. Now semi-retired, she lives in Twin Falls, Idaho, where she enjoys music and gardening when she 's not writing.