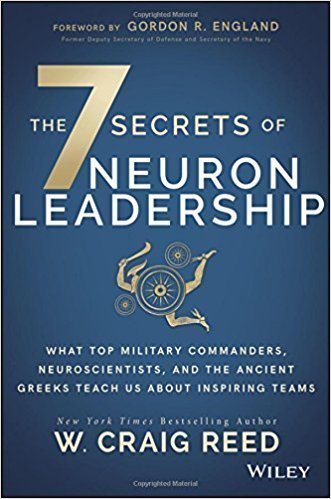 Book Synopsis: What Top Military Commanders, Neuroscientists, and the Ancient Greeks Teach Us about Inspiring Teams

Author Bio: William Craig Reed is the author of the non-fiction books The 7 Secrets of Neuron Leadership with a Foreword by Gordon England--former Deputy Secretary of Defense and interviews with a former NASA Administrator (CEO), Secretary of the Navy, Admirals, Generals, CEOs, top neuroscientists, Navy SEAL officers, and more (Wiley & Sons, 2017). Also, Cold War III (Veterans Publishing, 2015) and Red November: Inside the Secret U.S. - Soviet Submarine War (HarperCollins, 2010). Reed also wrote the novel The Eagle and the Snake: A SEAL Team Six Interactive Thriller (Diversion Publishing, 2012). Reed is the co-author of Tarzan, My Father with the late Johnny Weissmuller, Jr. (ECW Press, 2002). Reed served as a U.S. Navy diver, submarine weapons technician, and espionage photographer for special operations aboard nuclear fast-attack submarines. He earned commendations for completing secret missions during the Cold War, several in concert with Navy SEAL teams. The 7 Secrets of Neuron Leadership offers a diverse collection of wisdom and practical knowledge to help you build and lead your most effective team yet. Written by a former U.S. Navy diver, this book draws from the author's experiences and beyond to reveal key truths about the nature of teamwork, and expose the core of effective team leadership. You'll go back to ancient Greece to discover the nine personality types and the seven types of love that form the foundation of human interaction, and learn how to use this wisdom as a scaffold for communication within your own team. You'll mine the latest neuroscience research as you delve into the Triune Brain and personality neurotransmitters, and explore the biological hardwiring that can be finessed and focused to achieve results. Throughout, you'll gain insightful perspective from military and business leaders about what does and doesn't work in the real world; discussions with a former head of NASA, a Deputy Secretary of Defense, Navy SEAL officers, two Secretaries of the Navy, and dozens of CEOs, executives, researchers, and renowned world leaders provide invaluable advice backed by a track record of success. Gain insight from top business and military leaders Explore ancient Greek philosophy on team building Discover helpful truths from modern neuroscience research Learn to communicate, educate, and motivate more effectively