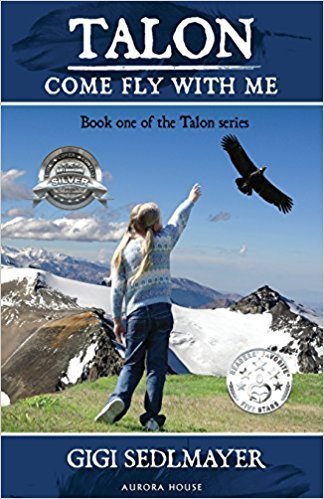 Book Synopsis: The adventure of a young girl will captivate your attention in this beautiful book. The words soar off the page and into your heart as you read this imaginative story.

Enjoy seeing the family dynamic from the first moment with her brother, to the gentle times with her mom, and the exciting scenes with her father.

A young girl, Matica, is jealous of her brother, Aiken's ability to have friends. But Matica's ability to form friendships is extraordinary. The trust and camaraderie between Matica and the condors is truly wonderful.

The way the author revealed each situation is fun to read and it made one anxious to see what's next. Acceptance was eloquently woven into the story without being blatant. And the other thing I learned was that when certain things happen, you don't always know why and just maybe something goodwill come of it.

Talon, Come Fly With Me is not only magical but inspiring. The author is expressive every step of the way and paint such vivid pictures with her words.

Author Bio: Gisela (Gigi) Sedlmayer was born on 19 May 1944 in Potsdam, a suburb of Berlin in Germany.

Her family escaped to the West just before the infamous wall went up. They moved around in Germany until finally settling in Munich where Gigi studied architectural drafting and met Albert in 1965, marrying in December 1967. She worked as a civil draftsperson in various private consultancies in Munich.

Since her uncle was a writer, she tried to write short animal stories herself. Nothing further came of it, but she developed a love for the written word and started to consume books.

In May 1975, Gigi and her husband moved to New Zealand. Because of language challenges, she started a handicraft business. As a specialty, she made colourful parrots of which she sold thousands in a few years.

In 1988, they decided to adopt and became adoptive parents of twin girls the year after. They lived in New Zealand for eighteen years and moved to Australia in September 1992.

Two years later Gigi was diagnosed with cancer. After operations and radiation, she withdrew, thinking that she would probably soon be dead, like her friend who died of cancer, but her two little girls gave her the courage to keep going. After a few years, still among the living, her brain started to work again, so she thought, ˜Get a grip on yourself and do something good with your life '.

She remembered the time she wrote short stories and got inspired again, seeing her husband Albert writing the story of their adoption. Her English became increasingly better so she pressed on to develop her creative writing.

Albert taught her how to use a computer and she wrote many short stories. She entered them in competitions and often got very good reports back, which gave her confidence to go on writing. One day the idea for the TALON series came to her and she spent the next several years bringing the story and the characters to life.

She now loves writing and spends most of her time at the computer, developing new story lines. She also loves traveling, 4x4 touring, swimming, gardening, handcrafting, reading, fossicking and enjoys good adventure DVD 's or going to the movies.