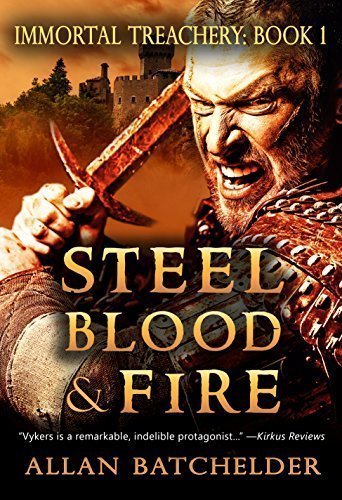 Book Synopsis: On the march, around the campfire, and in the taverns, they tell incredible stories about Tarmun Vykers, the Reaper - how he's never been cut in battle, how he once defeated hundreds of men by himself, how he exterminated an entire people over an insult. These stories make Vykers seem like a god, but he is a man, an arrogant, ruthless and bloodthirsty man. For all that, he may be the only thing standing between the human race and utter annihilation at the hands of the mad wizard who calls himself the End-of-All-Things. Against this backdrop, smaller, lesser folks struggle to fulfill their own destinies, folks like Aoife, burdened with a secret so dark she is driven to do the unimaginable and seek an alliance with fey powers no mortal has ever encountered.

Author Bio: Allan is a professional actor, educator, writer and former stand-up comedian. During his years on stage, he 's gotten to participate in countless battles “ some even with other people “ involving longswords, rapiers, daggers, staves, pistols, bottles, loaves of French bread and, of course, his grimy little fists. Allan is a lifelong fan of epic fantasy and horror, so you can just imagine how much he loves Grimdark. He 's currently working on the fifth and final book in his series, Immortal Treachery, before he tries his hand at a) steampunk and b) horror. His books are available in paperback and kindle formats on Amazon. Allan lives in Seattle, within a few miles of the two richest men on Earth and can thereby assure you that there 's no such thing as financial osmosis.