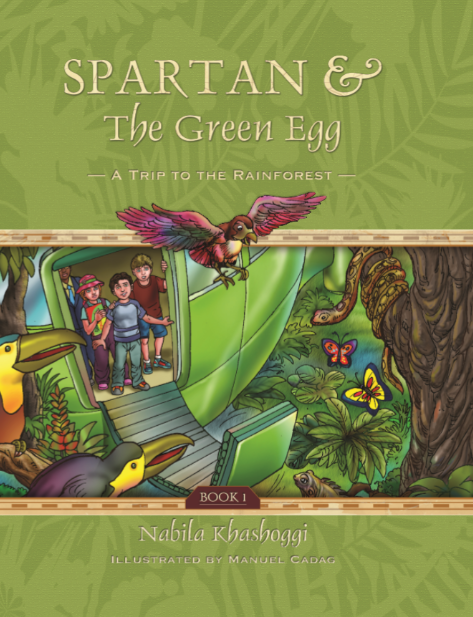 Spartan and the Green Egg: Book 1 A Trip to the Rainforest - Comics and Graphic Novels

Full Book Title: Spartan and the Green Egg: A Trip to the Rainforest

Book Synopsis: Go on a series of adventures with spartan, his three friends, and his dog, Grimm, as they travel the Universe. The mission of this talented group is to gain and share knowledge of their amazing discoveries. With the power of their minds, they made contact with a race of alien explorers, who communicate with them via an egg-shaped spaceship that is itself an organic alien being. Their expeditions are made even more exciting through the use of new technology and cool gadgets, provided by their new friend, who goes by the name of Egg.

In Book 1, A Trip to the Rainforest, the team’s introduction to the rainforest and all its wonders is made even more fun by the company of two native Amazonian Indians. Their extraordinary visit is not without a few close calls, After an eye-opening experience with a mysterious Shaman, their own troubles seem to pale in comparison to what they learn. The rainforest is in danger of vanishing, and all its creatures and plant life are at risk of extinction. With the help of the Green Egg’s out-of-this-world technology, the team is able to put a big dent into the path of destruction and re-new hope for the survival of the rain

Author Bio: Nabila Khashoggi is the author of the Spartan & the Green Egg series of books, designed to inspire and excite young minds to their responsibility for the Earth, and those who live on it. But, such lofty aspirations were not first or foremost in her mind when she created the series. The stories began as an act of love, stories told before bedtime about her son’s favorite toy: a green rubber egg. Her son, Spartan, was so excited by them that they continued, and then took on a life of their own. Realizing that others could benefit from the stories and their message, Nabila determined to bring it to the larger world.

Having travelled extensively, Nabila has been truly touched and sadden by the conditions many children must contend with around the world. It was then that she decided that a large portion of the money that is produced from the Spartan & the Green Egg book graphic novel series, would go to support an organization called The Children for Peace. Through this initiative, important life-changing necessities are provided, such as housing, food, medical attention, and education. In essence, children helping children. “I’ve never witnessed more generosity and willingness to help than I have with children,” says Khashoggi, “and if given the chance, our children will make our world a better place.” Khashoggi hopes that in some small part, her series can help nurture that giving spirit that all children seem to have.

Khashoggi has noticed that wherever the Spartan & the Green Egg books are read, the children become more aware of the world around them, both from an environmental standpoint, and a perspective of being fellow travellers on the planet, embracing the differences, extending tolerance, and helping one another. Through her Explorer’s Club, based on the series, readers are able to become involved, which, Nabila adds, builds a solid foundation for the future health of the planet, and the many cultures that share it.