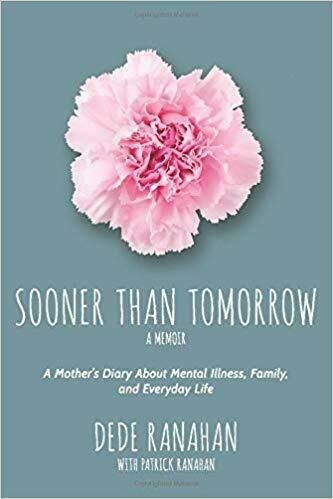 
Book Synopsis: I had no idea, as I was writing my diary (June 15, 2013 -- June 15, 2014), that I was capturing the last year of my son's life. Pat died, unexpectedly, on July 23, 2014, in a hospital psych ward. Suddenly, my diary morphed into a more poignant record than I had anticipated and, after he died, I discovered Pat had been making regular posts on Facebook. I decided to add his comments to my own.

One day, you know it will be your turn. Something alters your projection. There's a major shift and then events will be referenced as "before" or "after." Your life as it was versus the way it is now. In Sooner Than Tomorrow, I learn -- right along with the reader -- what will happen next. We're all on a journey. Thank you for going on this journey with me.


Author Bio: Dede Ranahan is a mother, grandmother, and long-time mental health advocate who's worn many career hats. In 1982 she authored a book for young girls that won a national award for nonfiction. In 2001 she established the Institute for Mental Illness Education on the Cal State Hayward campus. In 2004 she served as the Walk Director for the first NAMIWalk in San Francisco. From 2007 to 2010, she worked in the NAMI California office as the Policy Director for the Mental Health Services Act (Prop 63). Today, in her over-55 community, Dede runs a support group for families who have members coping with serious mental illness. She says, "In trying to help our loved ones, we need help ourselves. We need to know we're not alone."