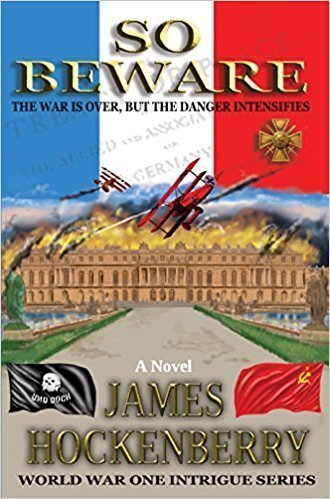 Book Synopsis: So Beware is set in 1919 during the Paris Peace talks. The Great War is over, but Europe remains engulfed in controversy and turmoil. The Allied leaders converge on Paris to haggle over the peace terms while Lenin's worldwide Communist movement threatens the democratic world. At the same, remnants of the German army refuse to accept defeat and plot revenge against the victors. Gil Martin and Paul & Shannon Keller, the heroes from Over Here, the first book in Hockenberry's World War One Intrigue Series, are again caught in a cauldron of deceit and danger. Action jumps between Paris and Berlin as Martin and the Kellers fight diabolical enemies, mysterious associates, and time. The tension climaxes when renegade German soldiers lead an air assault that threatens the signing of the Versailles peace treaty. Failure to stop the attack could lead to a new cataclysm.

Author Bio: James Hockenberry grew up outside New York City. A career financial executive, he has left Corporate America and has redirected his life to thriller writing with his World War One Intrigue Series, which dramatize the passions and controversies of the time and draw parallels to critical issues today: terrorism, immigration, and the staggering cost of war. In his books, the turbulence of 1915-1919 come alive through the personal struggles and passionate convictions of his characters. His award winning writing has allowed him to interweave three of his long-time passions: history, literature, and his German-American roots. He is known for his high stakes plots, page-turning suspense, meticulous research and complex characters. He also conducts lectures on World War One.