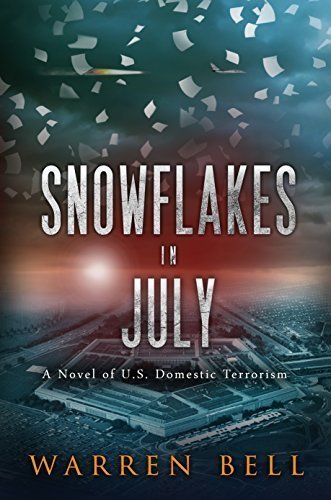 Book Synopsis: Domestic terrorists have a highly placed mole in the Pentagon!

Following his tips, the New Left terrorists make massive weapons thefts, assassinate moderate leaders, and explode bombs in the Pentagon, Capitol Hill, and police stations. When the mole relays weaknesses in the storage of Navy nuclear weapons, the terrorists prepare a commando raid to steal warheads.

In the Pentagon, POW hero Captain Mike Duquesne becomes suspicious of the mole and enlists Leslie Thomas, a Navy staff lawyer, in his investigation. The terrorists target her for blackmail for a youthful indiscretion. Can Mike thwart a nuclear theft?

Author Bio: Warren Bell began writing fiction as a teenager, and is now the historical fiction author of the Award Winning novel Fall Eagle One and the Best Selling novel Hold Back the Sun, both about WWII. His third novel, Asphalt and Blood is set among the Seabees in Vietnam. His fourth novel, Snowflakes in July, is a military suspense thriller taking place in the turbulent 1970s. His 29-years as a naval officer exposed him to many opportunities for ideas for writing his military and historical fiction.