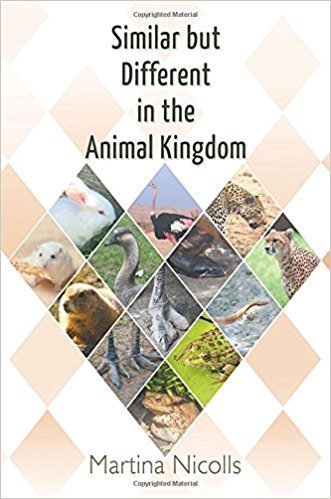 Similar But Different in the Animal Kingdom - Animals/Pets

Book Title: Similar But Different in the Animal Kingdom

Book Synopsis: SIMILAR BUT DIFFERENT IN THE ANIMAL KINGDOM is an educational science book for children, youth, schools, libraries, and anyone interested in animals. Learn about the similarities and differences between 25 sets of animals.

Butterflies and moths have different antennae. Which one has club-shaped antennae and which one has feathery antennae? Can cheetahs or leopards climb trees, and which one can't roar? SIMILAR BUT DIFFERENT IN THE ANIMAL KINGDOM has the answers!

This intriguing look at the animal kingdom provides FAST FACTS with an instant list of the main similarities and difference between each pair of animals, as well as their scientific classifications, descriptions, habitats, diets, breeding habits, and much more. There are interesting facts, fallacies, phrases, singular and plural animal words, collective nouns, and a glossary of scientific terms.

Author Bio: Martina Nicolls was a primary school and secondary school teacher in Australia, specializing in English, science, mathematics, inclusive education, children with special needs, and peace in education. She also worked in the vocational education and training sector (TVET) and in universities in Australia as a training consultant, information technology researcher, children's television researcher, and campus manager.

Martina Nicolls has a master of sciences communication degree and won the marine science journalism prize for her article on Australia's Great Barrier Reef.

Martina Nicolls thought of the idea for ˜Similar but Different in the Animal Kingdom' through her work as an international consultant in education and her visits to many countries. Her interest in animals, the environment, and nature led to this book.