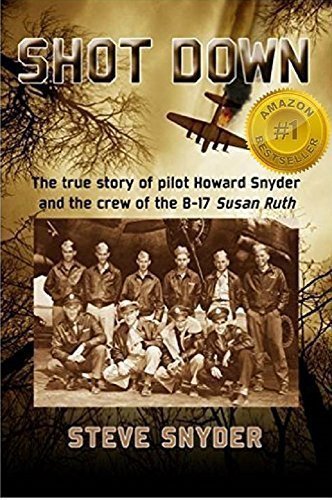 Book Title: SHOT DOWN: The true story of pilot Howard Snyder and the crew of the B-17 Susan Ruth

Book Synopsis: An Amazon Best Seller and winner of 25 national book awards, SHOT DOWN is set within the framework of World War II in Europe and recounts the dramatic experiences of each member of a ten man B-17 bomber crew after their plane, piloted by the author's father, was knocked out of the sky by German fighters over the French/Belgium border in 1944. Some men died. Some were captured and became prisoners of war. Some men evaded capture and were missing in action for months before making it back to England. Their individual stories and those of the courageous Belgian people who risked their lives to help them are all different and are all remarkable.

Author Bio: A graduate of UCLA, Steve Snyder lives in Seal Beach, California. In 2009, he retired from Vision Service Plan (VSP) after a 36 year career working in sales and sales management. He then began his quest to learn more about the World War II experiences of his father, pilot Howard Snyder, and his crew of the B-17 Susan Ruth. It became his passion, and after 4 ½ years of dedicated research, resulted in his book, SHOT DOWN, which has won 25 national book awards. A member of numerous World War II organizations, Steve is immediate past president of the 306th Bomb Group Historical Association. He keeps very busy making PowerPoint presentations to all types of organizations and attending air shows around the country signing copies of his book.