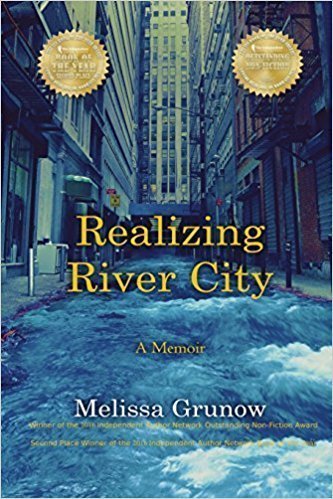 
Book Synopsis: At times, life can feel like a challenging feat of survival. Whether it's living through abusive relationships or figuring out the complexities of what it means to be a woman searching for love, REALIZING RIVER CITY is a memoir that proves how despite the troubles we may face, there is hope in the way we continually risk ourselves in search for the life we want to live. In her poetic exploration of past relationships, Melissa Grunow's honest words do not falter in the face of so much loss. Taking the rage we all feel about grief and pain, and funneling it into truth, beauty, and ultimately redemption on each page, REALIZING RIVER CITY is about discovering how the most important relationship is the one we have with ourselves.


Author Bio: Melissa Grunow is the author of I Don't Belong Here: Essays (forthcoming from New Meridian Arts Press, September 2018) and Realizing River City: A Memoir (Tumbleweed Books, 2016), which was selected as the overall Second Place Winner-Nonfiction in the Independent Author Network's 2016 Book of the Year Awards, winner of the "Outstanding Memoir" category and finalist for the "First Book-Nonfiction" category, as well the recipient of the Silver Medal Award-Memoir from the Readers' Favorites International Book Competition. Melissa's essay "Marked" was nominated for 2017 Best of the Net Anthology after appearing in The Nervous Breakdown. She was a Pushcart Prize nominee in 2014 for her essay "Home" and Limestone named her essay "We're All Mad Here: A Field Guide to Feigning Sanity" as an Editor's Pick and reprinted it in their 30th Anniversary issue; the piece was also listed as a Best American Essays 2016 Notable Essay. She is a four-time recipient of the Detroit Working Writers creative nonfiction prize, first place winner of the Rochester Writers' 2016 Summer Award in the Michigan Memoir category, and a semi-finalist for the DISQUIET International Literary Lisbon Writing Program award in 2015 and 2016. A book reviewer for The Coil, Melissa's work has also appeared in Creative Nonfiction, River Teeth, The Nervous Breakdown, New Plains Review, and Blue Lyra Review, among many others. She is also a live storyteller who participated in the 2016 Metro Detroit Listen to Your Mother show, occasionally competes in The Moth StorySLAM, and participates in local storytelling salons. Melissa holds a Bachelor of Science in English-creative writing and journalism from Central Michigan University, a Master of Arts in English from New Mexico State University, and a Master of Fine Arts in Creative Writing with distinction from National University.