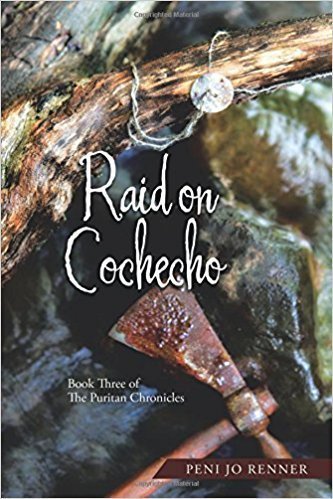 Raid on Cochecho - Faction (fiction based on facts)

Book Synopsis: Grace Hampton is a nine-year-old orphan in 1676 Cochecho, New Hampshire. Her predictably mundane life is turned upside down when she overhears plans for an attack on local Indians, and then immediately afterward, she meets Menane, a nine-year-old Pennacook boy who is also orphaned. When disaster strikes, the children's lives are irrevocably meshed together. Thirteen years later, they reunite as adults. Grace has become an industrious cheesemonger while Menane has developed an honorable status as a warrior in his tribe. When Menane's brother Kancamagus seeks revenge for the attack on their people, Menane risks his own life to save Grace from the inevitable siege.

Author Bio: Writing historical fiction has always been a lifelong dream of mine. I was discouraged for many years after receiving multiple rejection slips, and turned to other creative outlets like crocheting, quilting and cross-stitch for many years. Then I met a 3rd cousin of mine online who is also into geneology and history. She told me we shared a common ancestor who was involved in the Salem Witchcraft Hysteria of 1692, and her story had never been told. My love of writing was rekindled and I began to research this ancestor, Rebecca Blake Eames. In August of 2012 I had the privilege of visiting her grave in Boxford, Massachusetts.

After months and months of research, writing, rewriting and revising, Puritan Witch came into being, featuring a lovely sketch done by my sister-in-law, Jane Sisk.

I have several other story ideas I am working on at the moment, all pertaining to interesting ancestors my 3rd cousin has introduced me to.