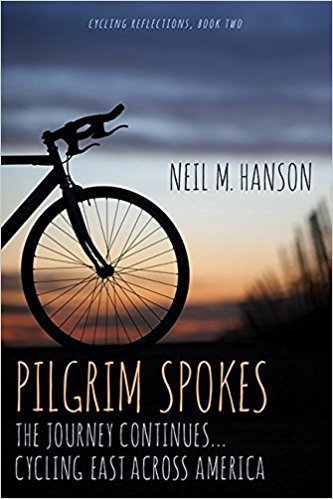 Book Synopsis: A cross-country bicycle adventure is the canvas for this tale of discovery along the winding backroads of America's heartland. The second book in the Cycling Reflections series, Pilgrim Spokes tells the story of the eastern half of the trans-American trek, continuing the saga begun in Neil's award-winning previous book”Pilgrim Wheels”which reconnoiters the western half of the journey.

More than just a journal of a bike ride across the country, Hanson's delightful and beautifully written story takes the reader on an engaging pilgrimage of observation and reflection. Often hilarious, sometimes poignant, and always inspiring, it's a must-read adventure that will stir your soul.

Author Bio: A lifelong cyclist, Neil Hanson's two-wheeled adventures have taken him across America, along the Natchez Trace, and throughout northern Italy. Originally from Kansas, Neil currently lives in Colorado, where he navigates his bicycle up and down the inclines of the Rocky Mountains. His books include Pilgrim Wheels, part one of the deep and introspective journey story woven around his cross-country trip that concludes in Pilgrim Spokes, as well as a how-to minimalist-touring guide, The Pilgrim Way.

Neil Hanson graduated from Kansas State University in the Flint Hills of Kansas, where he studied Architecture and Psychology. A short stint with an engineering firm taught him that sitting in one place and doing one thing wasn't working for him, so he began a meandering career path to which he's remained true. He's worked as a carpenter, truck driver, concrete finisher, salesman, operations manager, computer programmer, and project manager. His executive experience included several years in c-level positions.