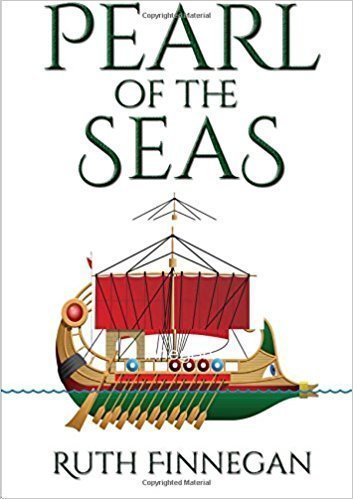 Pearl of the Seas, A Fairytale Prequel to Black Inked Pearl - Friendship

Book Title: Pearl of the Seas; a fairytale prequel to 'Black Inked Pearl'

Book Synopsis: An award-winning unput-downable tale of two children building a boat from a log they find buried in the sand, then sailing off to far-off fantastic lands in a stormy sea-driven adventure with their faithful - but accident-prone - dog Holly. There they learn much wisdom from a king who, like God, ˜has many names'. After an incredible sacrifice of his dearest dream by the boy (now growing up) they return - another dream - to a family tea with their loved ones. The tale is a prequel and companion to Ruth Finnegan's award-winning epic romance 'Black inked pearl', here adapted for preteens but characterised by (in a simpler form) the same unique dream-like and enchanted style as in the original novel. "It really fizzes".

Author Bio: Ruth Finnegan OBE is Emeritus Professor (Open University) and full-time writer - anthropologist, cultural historian, novelist. She is the author of around thirty influential academic books (several prize winning and highly influential: a couple of them started off major new research fields - ethnography of music and African oral literature - and had international conferences dedicated to them). She is also a Fellow of the British Academy, Honorary Fellow of Somerville College Oxford, International Fellow American Folklore Society, and in 2016 was awarded the Rivers Memorial Medal of the Royal Anthropological Institute of Great Britain and Ireland.

Both her novels (Black Inked Pearl (2015) and Pearl of the Seas (2016) are multi-prize-winning. Two further novels in what has now become a 'Kate Pearl' series and a series of picture books are partly written and will be published next year, Her screenplay based on Black Inked Pearl is Genre Winner (sci-fi/fantasy) in the 2017 Capital Fund Screenplay Competition and recommended (99%) as ˜highly marketable' by a WEScreenplay judge,

Like Kublai Khan and Pardise Lost, to which the first has been compared ( also to Dante) her novels and novellas all arrive, most amazingly and unexpectedly, in dreams, a part explanation for the unusual poetic style (Homer and her classical background has a lot to do with it too).