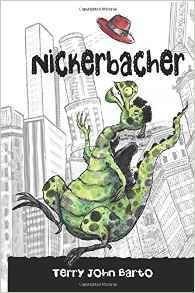 Book Synopsis: Nickerbacher is a dragon and aspiring comedian who travels to La La Land to audition for The Late Knight Show. Hoping to prove to his father “ and the world “ that dragons can be funny. Nickerbacher befriends a prince and a princess who help him realize his dream while paving the way for equal rights of all citizens.

All dragons aren 't your fire breathing, stomping on prince types. Some have dreams, some want to go to La La land and take up comedy as a career option. Los Angeles and Hollywood become magical places filled with equally magical creatures where our one of a kind dragon tries to make it big as a comedian by auditioning for the TV show The Late Knight Show. You get to experience the dreams, struggles, setbacks, insecurities, and hard work and eventual success from the perspective of a dragon and his two friends, Princess Gwendolyn and her rescuer turned admirer Prince Happenstance.

He lives in Los Angeles, California and enjoys Pilates, Yoga, and hiking with his dachshunds, Hunter and Mazie. Terry John Barto is also the author of Gollywood, Here I Come!