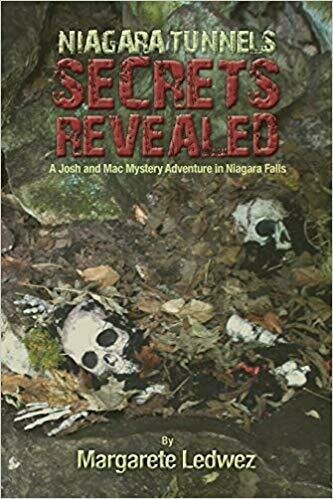 
Book Synopsis: Our intrepid heroes, Josh and Mac, together with their friend Mark, are drawn deeper into the mystery of the tunnels beneath Niagara Falls. As the tunnels begin to reveal more of their dark, long buried secrets, the trio discovers the truth about the dreadful events of the past, and about the cruel leader and his followers who used the tunnels for pure evil…
Following the historic timeline, they travel to Europe looking for answers. Clues unearthed in Germany and Italy point
straight back to the tunnels of Niagara, but the tunnels do not give up their secrets easily, and danger is never far away…
The events of the past may yet have a catastrophic impact on the lives of Josh,his friends and their families unless they act quickly.


Author Bio: Margarete Ledwez was born in Germany, emigrating to Canada with her parents and brother when she was just a year old. She quickly developed a longing to create which has eventually manifested itself in her writing.
Growing up in St. Catharines, Ontario, she became fascinated by the tunnels that had been used to hide slaves as part of the Underground Railroad and later by bootleggers during Prohibition.
While she and her husband were raising their own children they lived in Niagara Falls, just 5 kilometers from the celebrated Screaming Tunnel. Her curiosity was once again piqued when
she discovered the myths and legends surrounding the many tunnels under the famous falls.When writing this series of stories, she drew from her knowledge as well as her unending intrigue about the idea that there could be many more tunnels yet to be discovered.
“Niagara Tunnels Secrets Revealed” is Margarete Ledwez’s second novel, and is a sequel to “Past Secret Present Danger”. Margarete Ledwez lives in St. Catharines, Ontario with her husband Harry.