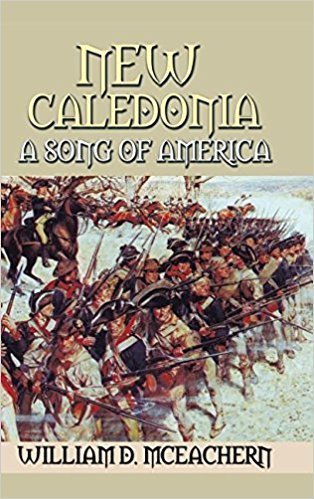 Book Synopsis: By the author of the critically acclaimed novel, Casting Lots, William D. McEachern, New Caledonia: A Song of America is his third historical novel and the second in the Caledonia series. The first, Caledonia: A Song of Scotland, told the story of James MacEachern fighting for Bonnie Prince Charles. New Caledonia continues the epic tale of James, as he emigrates from Scotland in 1750, fleeing the Duke of Cumberland 's murderous intent. Sailing to America, he walks the Great Wagon Trail from Philadelphia to Winchester, where he meets Danny Morgan. They become partners hauling freight, forming a life-long friendship. There, James yearns to be reunited with his wife, Jean Ann, and his son, Daniel. As wagon teamsters for General Braddock 's Army, they fight against the French and Indians in the Battle of the Monongahela. Is Captain David Campbell, the man who whipped Daniel Morgan, also the rapist and murderer of Jean Ann? After suffering that grand defeat, James, weary of war, migrates to join his fellow Scots and Scot-Irish in the Waxhaws region of South Carolina. As the years go by, the dark clouds of war gather again. The British besiege and capture Charles Town. Banastre Tarleton, Christian Huck, Patrick Ferguson and David Campbell, ruthless men of the British Legion, are unleashed by Generals Clinton and Cornwallis to ravage the South. With a decree that all must either fight for the Crown or be considered outlaws, James faces the decision all Patriots must confront. Pressuring him further to make the decision to join the Patriots comes from his best friend and now General, Daniel Morgan, the commander of the Flying Wing of General Nathanael Greene 's rebel army. Finally, James has a deadly score to settle with David Campbell. Who will survive?

Author Bio: William D. McEachern lives in Palm Beach Gardens, Florida, with his wife. He is a father and a grandfather. Mr. McEachern graduated from Duke University, with a B.A. in Psychology and Religion, his Juris Doctor Degree was from Fordham University School of Law, and his Master 's in Law Degree in Taxation was from New York University School of Law. He practiced trusts, estates, and tax law for nearly 40 years, before becoming a full time historian writing novels of historical fiction. An avid reader of history, he thoroughly researches and travels extensively to lend authenticity and realism to his works. To write New Caledonia: A Song of America, Mr. McEachern travelled both Braddock 's Road and the Great Wagon Road and visited, among other battlefields, King 's Mountain and Cowpens. His areas of expertise include the Roman Empire, Early Christianity, Scotland, and United States History with a particular emphasis on the American Revolution and the Civil War. Mr. McEachern 's first novel, Casting Lots, which is the life story of the Centurion who presided over the Crucifixion, garnered excellent reviews. His second novel, Caledonia: A Song of Scotland, explored Scottish history up to the Battle of Culloden and the beginning of the Highland Clearances. New Caledonia: A Song of America, the second novel in the Caledonia series, follows the Scots migration from Scotland to America, as they walk the Great Wagon Road and finally settle in North and South Carolina during the era of the French and Indian War and the America Revolution.