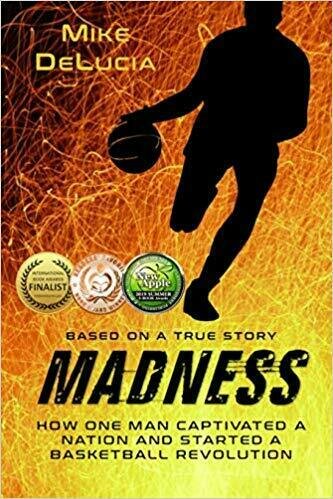 
Book Synopsis: In the days before the NBA, basketball was a filler sport between baseball and football season. Passing and shooting with two hands was at the center of basketball’s stop-set-shoot philosophy, until Hank Luisetti, a forward from Stanford University, defied the establishment by means of a running one-handed shot. With basketball’s integrity on the line, a promoter from New York arranged a grudge match between LIU and Stanford, in a game that would both test Luisetti’s unorthodox style and determine the unofficial national champion. What followed was a revolution that paved the way to the NBA and the NCAA March Madness competition. Madness: The Man Who Changed Basketball portrays the challenges of hall of famer Hank Luisetti to bust past the barriers of haughty basketball purists, as well as his own demons, and usher in basketball’s modern era. Based on a true story.


Author Bio: Mike DeLucia grew up in the Throggs Neck/Pelham Bay section of the Bronx and spent his childhood playing baseball, basketball, softball, and all of the street games associated with city living in the ‘60s and 70s. The Yankees were as much a part of his life as Sunday mid-afternoon macaroni and meatballs, religion, and summer vacations at Lake George. He would never have believed that his first book would call for a boycott of his beloved team. He didn’t write this manifesto because he stopped loving the Yankees, he wrote it because of how much he did, and tries to reclaim the fan-friendly atmosphere of the old ballpark from the corporate icy chill of the new one. Even though he wrote his first screenplay, The Hank Luisetti Story, now titled Madness, at the age of 22, he didn’t publish his first book, Boycott The Yankees until the age of 56. His next work, Settling A Score is a short story that invites readers to the Bronx during the 1960s and into the home of the DeFrancos where two estranged brothers are forced to play on the same little league team and learn life-changing lessons in the process. His oldest and newest project, Madness, is a historical fiction novel about Hall of Fame forward, Hank Luisetti, whose unorthodox playing style reinvented basketball in the 1930s and paved the way for March Madness and the formation of the NBA.