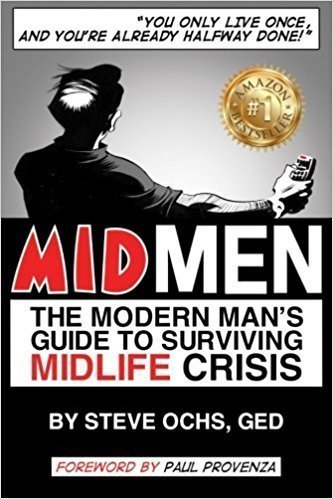 Book Synopsis: Eighty percent of modern, middle-aged men are having what is known as a midlife crisis. These men represent the highest concentration of wealth, the longest terms of unemployment and (drum roll please) the highest rate of suicide. They also represent over four million inappropriate gold stud earrings, seventeen billion individual hair transplants and eight thousand miles of hairy muffin top. These are the MIDMEN.

MIDMEN: The Modern Man's Guide to Surviving Midlife Crisis is more than just an informative self help book for a growing, if rapidly balding, generation. It 's strong medicine dissolved into a spoonful of beer that men can easily digest.

Author Bio: Steve Ochs, GED, rose from a teenage felon to a respected stand up comic/TV writer/producer with credits spanning from network TV to HBO and Showtime. If you 're old enough to need the book you might recognize him as a comic from his multiple appearances on Star Search (then working as Steve O.) or as a writer from his credits on the multi Emmy-winning Rugrats and other popular cartoons.

He returned to the stage in 2011 with a one man show called œLife in the Middle Ages,  which was named Best of the Hollywood Fringe and inspired MIDMEN, and which is itself being adapted into another one man show.

The highpoint of his career so far was having his personal hero, Richard Pryor, call him a œfunny motherf*cker. 