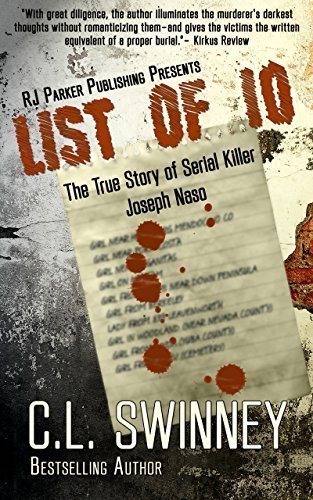 By a stroke of chance and aggressive police work, the wheels of justice stumbled upon this case. A lined sheet of paper that read, "List of 10," followed by several handwritten entries lead to the creation of a task force and the arrest of a stone cold killer.

This book is about the victims he left behind. I will never condone such actions, nor will I try to rationalize his behavior.

His name is Joseph Naso, and this book will grip you from the beginning and won't let you go until the final word.

Author Bio: C. L. Swinney is the author of nine international #1 best-selling true crime books in three countries. As a narcotic detective who dabbled in homicide investigation, and sheriff's sergeant, he brings his tenacious investigative techniques to the true stories he writes. His overall goal is to give the victims of violent crimes a voice -regardless of the victims' past or choices they made.

Chris consulted for a mini-series in Hollywood based on a serial killer cold case being re-opened. His latest work is being considered for film/TV options. He's contributed to PoliceOne.com and regularly gives exciting radio interviews for various radio programs throughout the country.