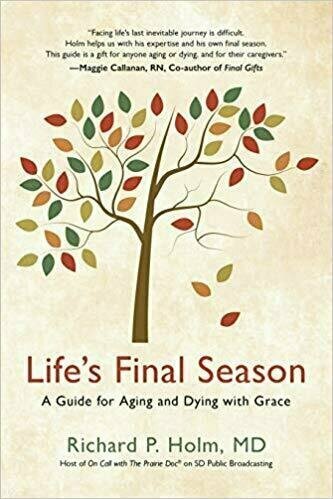 Life's Final Season: A Guide for Aging and Dying with Grace - Aging

Book Title: Life’s Final Season; A Guide for Aging and Dying with Grace

Book Synopsis: In his new book, medical doctor Richard P. Holm, provides wise counsel for all aging people and for those caring for them. Dr. Holm guides the reader in how to see aging as a privilege, not a failing and how to avoid the perils that come with the experience. Also, after dealing with his own pancreatic cancer, Holm provides a unique perspective on how to prepare for and face the dying process with grace. However, the book is more than just a guide to aging and dying with grace. Dr. Holm is a superbly trained and experienced internist and geriatrician, who blends modern medicine with Midwestern wisdom. • He advises a life of regular physical activity, enhanced social interaction, and good food comprised of balanced and moderate portions. • He advocates avoiding unnecessary pills and only the limited use of some supplements. • He speaks to the importance of intense listening, selflessness, the value of ethical thinking, and the making of living wills. • While giving value to caregivers, he explains how to define dementia and how to care for those with declining function. • Holm provides methods for the elderly to avoid scams, abuse, suffering and the fear of death. • The Prairie Doc®, as Dr. Holm is often called, points out why all of us, but especially baby boomers, are at risk for pain and anguish from futile medical intervention at the end of our lives. He clarifies how two-thirds of elderly Americans unnecessarily die in hospitals rather than at home. • When it’s time, and when it’s certain, Dr. Holm shows us ways to face death with courage, in comfort, and at home, when possible. His unusual combination of experiences qualifies him to be a voice of reason for those facing Life's Final Season.

Author Bio: Richard P. Holm, M.D., M.A.C.P. is an author and the host of “On Call with the Prairie Doc®,” a state-wide weekly call-in show on South Dakota Public Broadcasting. He recently released his second book “Life’s Final Season: A Guide for Aging and Dying with Grace.”

In 2018 the University of South Dakota awarded its Alumni Achievement for Professional Service award to Holm. He was inducted into the South Dakota Hall of Fame and cited as “South Dakota’s Voice of Healthcare” in 2017. His television show is entering its 18th season and his musings on health, Prairie Doc® Perspectives, are currently published as weekly columns in more than 100 newspapers in five states including South Dakota, North Dakota, Wyoming, Nebraska and Kansas.

Holm and his wife, Joanie Holm, R.N., C.N.P. have four adult children and continue to live in Brookings where they are active members of the community. Ongoing updates about his work can be found on the Prairie Doc® Facebook page https://www.facebook.com/ThePrairieDoc/ and website https://www.prairiedoc.org/book.html.