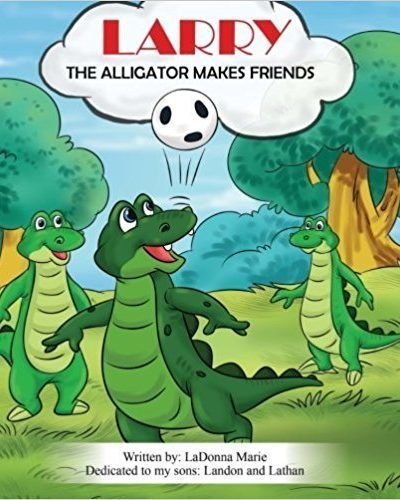 Book Synopsis: Making friends for some children can be difficult. Friendship building is an important part of connecting with others. Join Larry the Alligator as he learns assertiveness, persistence, and confidence while making new friends.

Author Bio: LaDonna Marie is an International Multi -Award winning Bestselling Author, Writer, Poet, and Motivational Speaker. She published her first poem in anthology: Whispers with The League of American Poets in 2007. In 2010 she self published her first book Expressions of the Mind, Body & Soul. She received a Certificate of Congratulation from Congressman Bennie Thompson 2nd district of MS. She was inducted Who's Who in Black Mississippi in 2012. In 2013 she released her 2nd book Until Tomorrow Comes. She featured in the International Sibella Poetry Magazine for the entire year of 2014, and also she is apart of the Anthology: The Gospel According to Poetry. Until Tomorrow Comes was awarded Honorable Mention in the 2014 Paris Book Festival and a 2014 DJ Gatsby Book Club Literary Award Winner in Poetry. She was also a Finalist in 2015 Diva Author / Writer for Divas of Colour International Award. She was a 2015 Finalist for National Indie Excellence Awards, received Honorable Mention in New York Book Festival, Red city book awards Finalist and Bronze Medal Readers' Favorite Winner. She also placed in 2015 and 2016 New England Book Festival Honorable Mention. She is a two time Indie Author Legacy Award Finalist for Poet of the Year. She is a 2017 Red City Review Social Media Winner, a 2017 Winner in the John E Weaver Excellent Reads Award for Fiction:Love Poetry and Finalist for Book Excellence Awards.