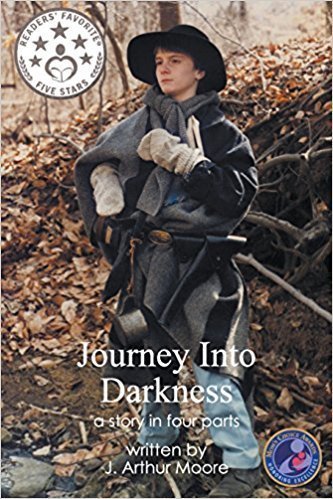 Book Synopsis: As it begins, Journey follows Duane Kinkade, his parents, his dog, and his best friend, Jamie, from his father's departure to the war in the spring of 1861, through a season of uneasy calm sharing time with his friend on the family farm, into a summer of unexpected violence with the death of his mother and his own near death, toward a winter of loneliness, culminating in the spring of 1862 when Duane sets out in search of his father by running away to the war. Duane enters the war at the Battle of Shiloh, where he falls wounded and is treated by a Union doctor and his teenage ward. They soon become close friends. With his identity concealed, he enters battle with the medical corps at Perryville and Stones River, after which he travels in search of the Confederate Army at Tullahoma, Tennessee. Circumstances lead the boy to Lee’s army in camp outside Fredericksburg. As courier and drummer, Duane serves with the Confederate Army at Chancellorsville and Gettysburg. Wounded and left for dead on the battlefield at Gettysburg, he is recovered by a preacher and eventually reunited with his doctor friends, with whom he travels through the events of the Wilderness, Spotsylvania Court House, and Cold Harbor. Events and a letter about his father send Duane from the war and he journeys homeward with a young friend, the son of a sutler. Duane’s journey comes full circle as he returns to his home where it had all started, a veteran of two and a half years of warfare and battlefield experience.

Author Bio: A graduate of Jenkintown High School, just outside of Philadelphia, Pennsylvania, Moore attended West Chester University. Upon graduation, he joined the Navy and was stationed in Norfolk, Virginia, where he met his wife to be, a widow with four children. Once discharged from the service, Moore moved to Coatesville, Pennsylvania, began his teaching career, married and brought his new family to live in a 300-year-old farm house in which the children grew up and married, went their own ways, raised their families to become grandparents themselves.

Retired after 42 years, Moore has moved to the farming country in Lancaster County, Pennsylvania, where he enjoys the generations of family, time with his model railroad, and time to guide his writings into a new life through publication. It also allows for the opportunity to participate in a local model railroad club as well as time for traveling to Civil War events and presenting at various organizations and events about the boys who were part of that war. He also helps to organize an annual Civil War living history encampment, shares the process of writing and readings from his work, and does book signings at a variety of locations.