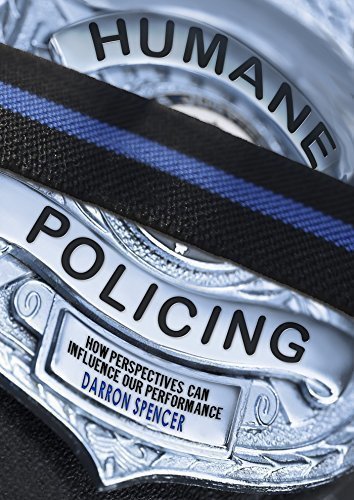 Humane Policing: How Perspectives Can Influence Our Performance - Law

Book Synopsis: Humane policing. Some would say that's an oxymoron, but officer Darron Spencer believes those words are inseparable. In his three years with a busy sheriff's office, Darron covered an enormous number of cases and arrested many individuals for a variety of crimes. Tellingly, 90% of those he arrested thanked him.

In his newly published book Humane Policing: How Perspectives Can Influence Our Performance, Darron explains his approach to law enforcement and how he worked to change perspectives, improve relationships, and induce cooperation with his fellow officers as well as with the general public he vowed to serve and protect.

By extension, Darron addresses the growing crisis in our society involving the frequently inhumane and unproductive--even when lawful--interactions between law enforcement and the public. Written for his fellow law enforcement professionals as well as the general public, Humane Policing explores why law enforcement needs to change, chronicles the experiences that shaped Darron's perspective, and offers life-changing tools his colleagues can use to better serve the public.

Author Bio: What lies behind us and what lies before us are tiny matters compared to what lies within us. “ Oliver Wendell Holmes

I enlisted in the United States Marine Corp at age seventeen and was assigned to the ceremonial unit at the Marine Barracks 8th & I in Washington, D.C., where I possessed a top secret Department of Defense clearance and received additional training in riot control.

I participated in many events, but a few that have special significance to me include:

After my honorable discharge from the Marines, I was contracted to the Department of State, where I possessed top secret clearance and was assigned to the Turkish Embassy and the diplomatic mail and pouch facility. I also received a special assignment of security for Yasser Arafat at his hotel and helped prevent the riot in April 2000 of Washington, D.C. by the World Trade Organization.

After working for the Department of State, I enrolled at Colorado University, where I majored in molecular, cellular, and developmental biology. Eventually, I left college to enter the Red Rocks Law Enforcement Academy. After graduating, while waiting to be hired, I had the opportunity to start a specialty construction company, a business I ran for seven years. When the economy crashed in 2008, I was forced to file for bankruptcy, an unexpected turn of events that allowed me to experience life from the other side of the economic spectrum.

Returning to my roots, I became a corrections officer with a sheriff's office in Colorado. Here, my approach to law enforcement began to develop. I became comfortable speaking with inmates because I saw them as people who had made bad decisions rather than as bad people. I investigated crimes in the facility and learned how to gain the trust and respect of the inmates I supervised.

I joined the patrol division in 2013, but after 20 months, a debilitating medical condition ended my career. In my 20 months as a police officer, I oversaw more than 250 cases that resulted in 40 felony and 74 misdemeanor arrests. I personally wrote 57 warrantless arrest affidavits, seven arrest warrants, two production of records, and a single search warrant. I also assisted in four death investigations and booked in over 150 items of evidence. My cases were forwarded to the military, FBI, ATF, DEA, the Gang Task Force, ICE, the Drug Task Force, and local agencies. I was awarded with Deputy of the Year and received the Ribbon of Merit. Key cases I worked on included:

¢ Investigating a stolen handgun exchange at a high school

The statistic I'm most proud of is that 90% of the individuals I arrested thanked me.

I had tremendous success gaining the cooperation and assistance of career criminals while investigating my cases. In part, I believe this is because my diverse background allowed me to relate to everyone, regardless of their ethnic background or socio-economic status. My perspective led to the unique approach to law enforcement I call Humane Policing.

My goal today is to travel around the country and meet with my brothers and sisters in law enforcement to share my perspective and approach. I believe Humane Policing will make their duties easier and will also, in time, improve their relationship with the communities they serve as well as the public image of law enforcement on a national scale.