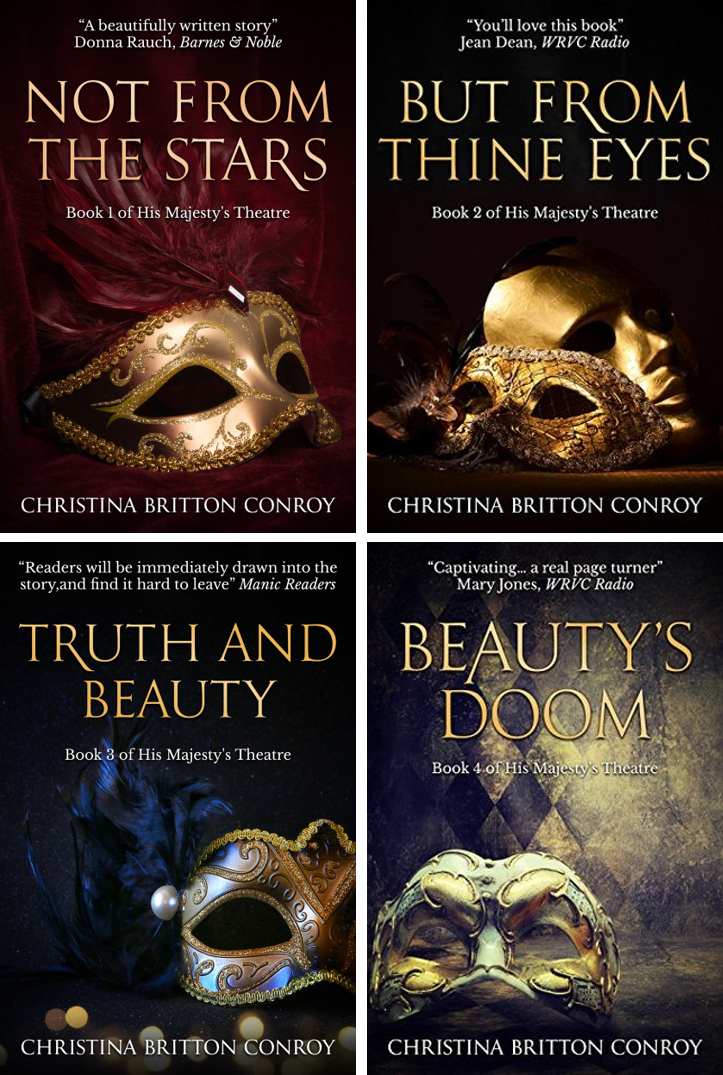 His Majesty's Theatre Series - Books in a series

Book Synopsis: London 1904: a gay actor-manager escapes arrest by pretending to marry his leading lady and father her illegitimate child. Together they harbor a country heiress escaping a forced marriage.

Author Bio: Novelist/ screenwriter/ singer/ actor/ Irish harpist/ Certified Music Therapist/ Licensed Creative Arts Therapist, CHRISTINA BRITTON CONROY has many passions. Her first novel, One Man's Music, received critical acclaim. OnlineBookClub said: "...His Majesty's Theatre series... has all the requirements of a Shakespearian play; star- crossed lovers, controlling fathers, and cruel betrothal arrangements" Kirkus Reviewers called her non-fiction (I want to Go to Lithuania) or How to have Fun with our Aging Parents - "Sensitive and empathetic; offers excellent suggestions for coping with the harsh reality of caring for elderly parents." Christina's screenplay adaptation of From the Shadow was produced in Hong Kong. Other stories and non-fiction articles have appeared in anthologies and journals, including Backstage. As a classically trained singer/actor, Christina toured the globe performing in operas, operettas and plays. She soloed at Radio City Music Hall, and toured with Rock Hudson in Hal Prince's ON THE 20th CENTURY. As a music therapist, Christina works with children and adults. Her nonprofit, Music Gives Life, won her NY1 TV News's NYer Of The Week. Her education includes creative writing and screenwriting at NYU; acting at The Actors' Studio; music at Juilliard Pre-college, Interlochen, a MusicBac from the U. of Toronto, and music therapy M.A. from NYU. She lives in Greenwich Village, NYC.