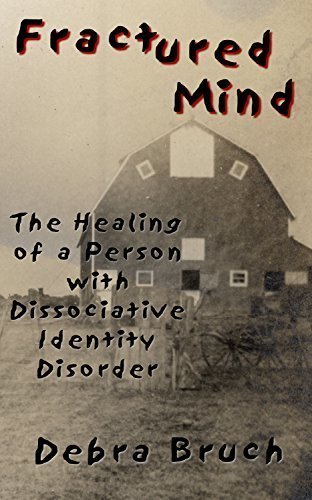 Book Title: Fractured Mind: The Healing of a Person with Dissociative Identity Disorder

Book Synopsis: Fractured Mind: The Healing of a Person with Dissociative Identity Disorder portrays a person's journey from violence to redemption and healing. It is a heart-wrenching story of horror, pain, acceptance, and hope. Warning: this book is for adults only due to explanations of sexual and physical violence causing dissociation at an early age.

Helped by intensive EMDR psychological therapy, Debra's subconscious peels away layer-by-layer, revealing horrific trauma caused by her parents at a very young age. Her damage was so severe, the foundation of her psyche had to be remade.

The reader will follow Debra as she reveals an unusually close relationship with God and what she calls the "Other Realm." The story witnesses the love and comfort of God, but it also tells of God's wisdom and justice. Debra brings her relationship with her God to life in the book and that relationship seems as real as any relationship with a loving, guiding, parent.

Debra writes a narrative throughout the book, but the main writing style is an authentic email dialogue between her "parts" and Bruce. Bruce's wisdom and spiritual understanding lend an amazing perspective on the struggles of healing from violence.

Dissociative Identity Disorder is not a mental illness, but a disorder. (Many years ago, DID was called Multiple Personality Disorder.) The healing has released her of her trauma. She is no longer bound by the violence of her past.

Author Bio: I am a retired Associate Professor of Theatre at Michigan Technological University. I received my Ph.D. degree in Theatre from the University of Missouri “ Columbia.

I was active in the Association for Theatre in Higher Education (ATHE), especially with the Religion and Theatre Focus Group. I was on R&T's executive council for several years, was conference planner, and chair/focus group representative. I was also chair of the Advocacy Information Bank Subcommittee of ATHE's Advocacy Committee for several years. Through ATHE, I was the founding and general editor for the peer-reviewed journal, The Journal of Religion and Theatre, from 2002 to January 2008.

I am interested in the relationship between Australian culture and Australian drama. I published and presented papers exploring Australian Aboriginal drama for over twenty years. In January, 2007, I was invited and traveled to Tehran, Iran to attend the International Seminar on Religion and Drama on merit of my article about Jack Davis' The Dreamers.

Besides my work about Australian Aboriginal drama, my article, The Prejudice Against Theatre, has been cited in several articles and dissertations. This article surveys the historical roots of Christian prejudice against theatre. I also served as an adjudicator for the Kennedy Center/American College Theatre Festival for several years. I have been included in Who's Who of America's Teachers and Who's Who of American Women.

I have been writing plays since 1973. Several plays have been produced and published.

I am an ordained minister in Community of Christ.

I retired in 2013. Since retiring I have published two books. Christian Drama for the Worship Service is an anthology of different types of short drama and essays on the relationship between religion and theatre. The book has been used as a textbook for Christian drama courses at different universities since 2015. Fractured Mind: The Healing of a Person with Dissociative Identity Disorder is a book about the very dark side of child abuse and the journey of healing. The book won the 2016 eLit Book Award, Silver in Psychology/Mental Health as well as the 2017 Book Excellence Award Finalist in Psychology. Both are published as paperback and Kindle and can be found on Amazon.

I am now researching and writing an historical novel titled Keweenaw: I. Origins. The main theme examines our relationship with the earth. The Keweenaw Peninsula is that small piece of land that juts up into the bottom of Lake Superior that is seen on all the maps. Its history is quite unique. I'm beginning with how Lake Superior was formed, and when I researched I was really very surprised! I had no idea it was formed like that as I always thought the glaciers carved out Lake Superior.