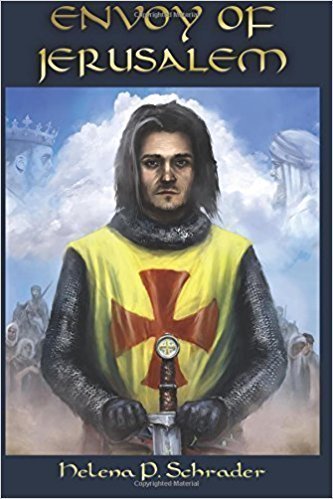 Envoy of Jerusalem: Balian d'Ibelin and the Third Crusade - Biography

Book Title: Envoy of Jerusalem: A Novel of the Third Crusade

Book Synopsis: Hollywood made him a blacksmith; Arab chronicles said he was like a king.

He served a leper, but defied Richard the Lionheart.

He fought Saladin to a standstill, yet retained his respect.

He was a warrior and a diplomat both:

In Envoy of Jerusalem Balian has survived the devastating defeat of the Christian army at the Battle of Hattin and walked away a free man after the surrender of Jerusalem, but he is baron of nothing in a kingdom that no longer exists. Haunted by the tens of thousands of Christians now in Saracen captivity, he is determined to regain what has been lost. The arrival of a vast crusading army under the soon-to-be-legendary Richard the Lionheart offers hope”but also conflict, as natives and crusaders clash and French and English quarrel.

Author Bio: Helena P. Schrader earned a PhD in History from the University of Hamburg with a ground-breaking biography of a leader of the German Resistance to Hitler. She has published numerous works of fiction and non-fiction since. She is a career diplomat currently serving in Africa.

For readers tired of clichÃ©s and cartoons, award-winning novelist Helena P. Schrader offers nuanced insight to historical events and figures based on sound research and an understanding of human nature. Her complex and engaging characters bring history back to life as a means to better understand ourselves.

Visit http://www.helenapschrader.com or follow her blog: http://schradershistoricalfiction.blogspot.com for updates on current works, recent reviews and excerpts.