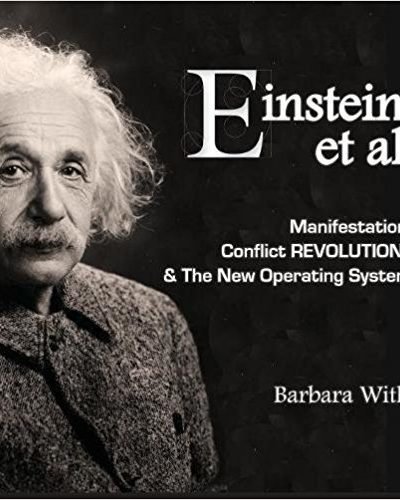 Book Synopsis: In 1905, Albert Einstein produced five scientific theories that revolutionized the world. Among them was E=MC2, perhaps the most famous mathematical equation in history. His theory of relativity predicted the existence of gravitational waves as the basis of all physical matter.

One hundred years later, scientists at the Laser Interferometer Gravitational-Wave Observatory (LIGO) proved the existence of Einstein 's gravitational waves by recording the sound of two black holes colliding, thus fulfilling his predictions. This discovery is considered a major breakthrough in modern science and has Einstein revolutionizing the way scientists see the world 60 years after his death.

"Einstein, et. al: Manifestation, Conflict REVOLUTION ® & The New Operating System" takes these predictions further by providing not just maps of these gravitational waves, but a scientific definition of the 5th Fundamental Force of the universe ”Compassion ”and how it uses the other four fundamental forces to manifest matter, one particle at a time, to create the entire universe.

With 's œImagined Einstein  goes on to theorize how human consciousness interacts with these waves, as well as a practical formula for humanity to create œworld peace, one person at a time, starting with self. 

Based on decades of research and development by the author and thousands of people around the world, Conflict REVOLUTION ® takes E=MC2 and turns it into a process for each individual to bring peace first to his or her own wave, and then project that peace into the physical world. The results have been what With 's œImagined Einstein  calls œinstalling a new operating system,  wherein you become intuitively guided by Compassion and in any given moment inspired to take control of your own Domain, where your power truly lies.

Utilizing what are referred to as the three "Human Dimensions" ”Emotion, Intuition, and Intellect ”Conflict REVOLUTION ® trains you to use free will to get out of the way, allowing Compassion to naturally manifest in your life for the greatest good of the entire situation, whatever it may be. As each individual brings peace to his or her own life, the planet changes as well. In this way, we create world peace, one person at a time, starting with each individual. Starting with you.

Come along on an intricate, intimate journey into how matter manifests. See how your relationship to your three Human Dimensions influences the manifestation of that matter. Study the maps of human consciousness and then you decide. Who else but Einstein could reach from beyond the grave to deliver the next revolution in human existence?

With says, œMy hope is to inspire you to new ways of thinking and acting to free you from the degenerative dramas of conflict and redirect your precious life force into becoming the change you wish to see in the world, first from within. In this way, one person at a time, we change the entire world. 

Author Bio: Barbara With is an international peace activist, award-winning author and composer, performer, psychic, workshop facilitator, and inspirational speaker living in northern Wisconsin. Her other books include "Imagining Einstein: Essays on M-Theory, World Peace & The Science of Compassion", winner of the 2007 National Best Books Award for Fiction & Literature: New Age Fiction, and the 2007 Indie Excellence Book Award for New Age Fiction; "Party of Twelve: The Afterlife Interviews," winner of the 2008 Best Beach Book Award for Spirituality; "Guerrilla Publishing: How to Become a Published Author & Keep 100% of Your Profits"; "Madeline Island Artist Colony"; "UNINTIMIDATED: Wisconsin Sings Truth to Power," runner up in the 2013 Great Midwest Book Festival: Photography; and "Diaries of a Psychic Sorority: Talking With the Angels," coauthored with Teresa McMillian and Lily Phelps.

She also has two CD of original music, "Innocent Future" and "Solitaire." Her song, "Voices in the Wind," co-written with Raeanne Ruth, was runner up in the 2001 John Lennon Songwriting Contest.