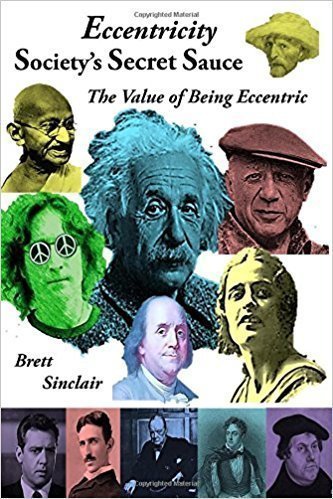 Book Synopsis: The seven attributes of eccentric people are their nonconformist nature; creativity; intense curiosity; idealism; high level of intelligence; outspokenness; and opinionated natures, weaved together by the thread of courage. Using twelve renowned people who each possessed all of these attributes of eccentricity, the existence of eccentricity as a positive force for the beneficial progression of society is proved through the historical facts of their lives: Martin Luther, Vincent van Gogh, Benjamin Franklin, Lord Byron, Albert Einstein, Nikola Tesla, Winston Churchill, Pablo Picasso, Mahatma Gandhi, Raymond Burr, Ayn Rand and John Lennon.

The scant modern day scientific research extant and centuries of anecdotal accounts of eccentricity served as a springboard for revealing an underlying cardinal theme of this book, that eccentricity does not equal insanity nor do eccentric people deserve to be regarded pejoratively. They have been, are, and will continue to be valuable members of society who through their eccentric natures have made exponential positive changes in society possible.

The famous 19th century statesman and philosopher John Stuart Mill said: œThe amount of eccentricity in a society has generally been proportional to the amount of genius, mental vigor, and more courage which it contained.  As the prolific historian and intellectual giant Henry Steele Commager saw it until his passing in 1998, œA free society cherishes nonconformity. It knows from the nonconformist, from the eccentric, have come many of the great ideas.  This book reminds us that John Stuart Mill got it right a long time ago and proves through historical facts as opposed to mere theory that from time immemorial and across every field of endeavor, eccentric people have been and continue to be in the vanguard of boldly creating positive changes and magnificent advancements that make the world a better place to live in.

Author Bio: The author has a B.S. in history and a J.D. from a top ten law school and has done graduate work in the fields of communication and political science. His work as a criminal defense attorney for many years before becoming a pilot gave him an uncommon insight into the difference between insanity and eccentricity and into the psyche of countless eccentric people, as has his journeys from a young age to over sixty foreign countries on five continents. A lifelong student of history and an individual who has had singular opportunities to personally observe and interact with eccentric people has afforded him a unique perspective on the subject of eccentricity. He is also the father of seven children and has done extensive volunteer work in Africa, India and other parts of Asia, as well as in South America.