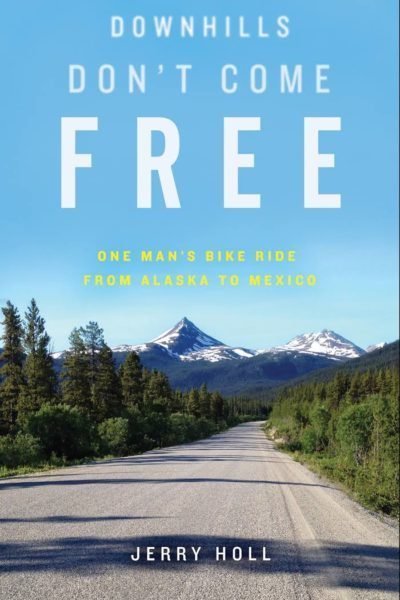 Book Synopsis: One man. One bike. One tent. One hell of an adventure!

Biking from Alaska to Mexico solo is hard enough. But when you throw in bad weather, flat tires, hair-raising roadways, and unpredictable grizzly bears, only a fool would keep going. Fortunately, Jerry Holl was just the fool for this particular two-wheeled odyssey. Coming off a lifetime of corporate positions, he wasn 't exactly prepared ”his most trusted companion on the trip was a bike he didn 't know how to fix. But inexperience and lack of a concrete plan didn't stop him. For fifty-one days, Holl pedaled his way across two countries, encountering everything weird and wondrous North America had to offer.

Downhills Don 't Come Free takes readers through the ups and downs (literal and figurative) of Holl 's ride. By turns amusing and reflective, self-deprecating and self- assured, it chronicles every aspect of the journey, from the breathtaking vastness of the Alaskan-Canadian wilderness to the fortitude, generosity, and eccentricity of the people he met along the way.

When he set out on this 3,600 mile bike ride, Holl had nothing more in mind than going on the adventure of a lifetime. "I didn't know how I'd grow," he says, " I just knew I would." It wasn 't long, however, before he was urged by numerous people who'd followed his blog, that the stories and lessons learned during his trip needed to be shared with the world.

A dynamic speaker and relentless optimist, Jerry Holl's book and message will inspire readers of all ages to work hard, play hard, and challenge themselves to their own adventures in life.

Author Bio: Jerry Holl is an independent business consultant, professional speaker, and weekend warrior. He holds an engineering degree, an MBA and has over three decades of sales and leadership experience. In addition to writing, Holl enjoys travel and outdoor adventures, including skiing and backpacking. He has also done some commercial role-play work, having appeared in advertisements for such companies as Health Partners, Medtronic, FedEx, Thompson Reuters and Pioneer Seeds. Jerry resides in Minnesota with his wife and has three grown children.