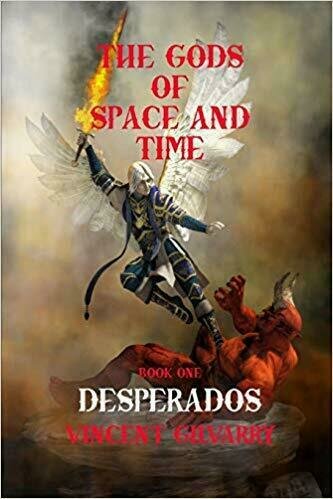 Desperados - Books in a Series


Book Synopsis: To catch a thief, you have to set a trap…but you’d need an even better plan to catch an intergalactic psychopath.
Desperados is the first book in the series called The Gods of Space and Time, about a new breed of hero called Yumi Masters...trouble-shooters of the intergalactic variety.
It's an epic fantasy adventure set in a semi-surreal and strangely supernatural world where anything goes.
Desperados has it all, mystery, intrigue, pain and anguish, a generous dose of G-rated humour and a helluva lot more.
To succeed at this task, these boys have no choice but to reincarnate as human beings, and that, as they discover, has quite a few drawbacks.
The odds are against them every step of the way and it will take a lot more than stealth and cunning to beat Morpheus at his own game...but they have a few tricks up their sleeve.
The star of the show is not just any old desperado. Addric is about to become a pivotal player in a drama of cosmic proportions, and his talents are about to get the biggest workout of his life. Addric is not just any old desperado. He is a descendant of The Gods of Space and Time.


Author Bio: Vincent Gilvarry is an Australian artist and author from tropical north Queensland, and the recipient of a 2019 Book Excellence Award.
When he sits down to write, the ideas just flow. Unlike many authors who prepare their work in detail, he just goes for it. He usually gets an idea in his head at three o’clock in the morning and pecks away to see what will happen. After a while, the magic kicks in and the story tells him where to go.
He has qualifications in the arts and psychology and has had a variety of jobs over the years. One of those was an opportunity to work in an art program in a psychiatric hospital in Melbourne for six years.
But in the year 2000, his life took a detour down a somewhat different path. One fine summer day, the Muse of Art and Crafts packed her bags and waved goodbye. But a few moments later, her twin sister, the Muse of the Written Word popped her head around the door, and she has been whispering in his ear ever since.