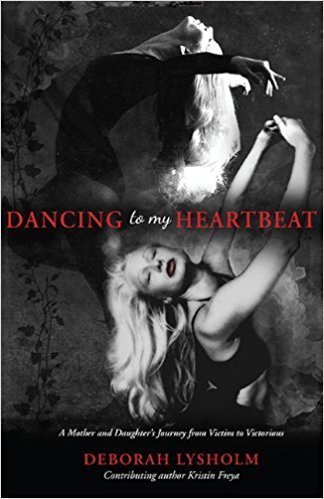 Book Title: Dancing to My Heartbeat: A Mother and Daughter's Journey from Victim to Victorious

Book Synopsis: Deborah Lysholm, a professional dancer, prayed that she could outrun the bullets as her husband, holding a rifle, chased her outside on a blustery April night in 1992. After 23 years of a terror-filled marriage, she knew she had to leave him”no matter how much she feared him and believed his threats that he would find her and kill her. Instead of becoming another statistic, she summoned unbelievable courage to start a new life for herself and her college-aged daughter, Kristin. A cosmic slingshot propelled Deborah and Kristin into an unknown universe, traversing discriminatory court battles including the first-ever domestic violence lawsuit filed in civil court. They staked their place in the performing arts by building a celebrated performing arts center, capturing the attention of entertainment luminaries, and embarking on exhilarating world travels in Europe, Asia, Egypt and the forbidden island of Cuba, discovering the women they were meant to be. Deborah and Kristin's journey is a hero's journey and an inspiring odyssey as they flee the centrifuge of domestic violence to follow a path from darkness to light. Dancing to My Heartbeat answers the question, Why didn't you just leave? It conveys the beauty when you do.

Author Bio: Deborah Lysholm's career spans five decades”from performing, choreographing, and teaching thousands of students, to in 1998 building her own performing arts center, Heartbeat Performing Arts Center, in Apple Valley, MN, which she co-directs with her daughter, Kristin Freya. Reaching out to the world dance community, Deborah's journey has taken her around the U.S., and to Europe, Asia, and Cuba, where she established travel-study and cultural-exchange programs in the performing arts.

Since childhood, Deborah has been fortunate to study with noted professionals in dance and has been a featured dancer in productions in several venues including Minneapolis Orchestra Hall, O'Shaughnessy Auditorium, noted jazz clubs, and internationally in Tokyo, London (Sadler's Wells, Leeds Castle), Havana, Geneva, Milan and Barcelona. She appeared on stage at the Auditorium Theater in Chicago with the late Gregory Hines.

In addition to a lifetime devotion to dance, Deborah and daughter, Kristin, are survivors of two decades of domestic violence, and the first in the U.S. to file a domestic violence lawsuit in civil court. Their story of survival and starting a new life has been featured in major newspapers and television news shows, and captured the attention of many entertainment celebrities such as jazz singer, Bobby Caldwell, who presented a small concert at Heartbeat in honor of Deborah's work to bring public awareness of domestic violence. Deborah is a sought-after speaker (www.deborahlysholm.com), enlightening audiences about the realities of domestic violence and that we all have it in us to start over if we are presented with that task¦or opportunity. Deborah is the author of Surviving in Rhythm and East Meets West articles published in the International Tap Association magazine. Deborah and Kristin are co-authors of the book, Dancing to My Heartbeat, published 2013. Written with compassion from their hearts to the heart of anyone in a difficult situation who desires to begin anew, their memoir educates the public about domestic violence and also the joy of dance and its incredible ability to lift spirits and heal. Deborah dares us to dream big.