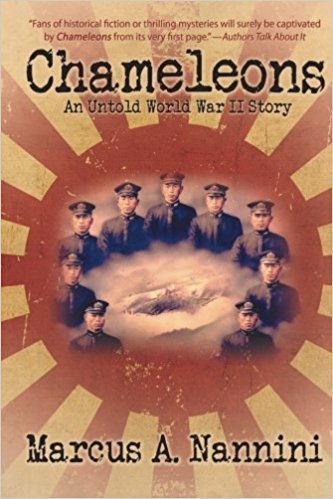 Book Synopsis: "Chameleons: An Untold World War II Story" by Marcus A. Nannini begins in1941 with the Japanese midget submarine I-16-tou lurking unseen in the depths of Pearl Harbor, Hawaii. When the shock waves of the commencing Japanese aerial attack on December 7, 1941 wake its crew, they rouse the machine from its silent slumber and begin an attack that will take down a U.S. battleship.

More than one American sailor swore revenge for his comrades that day. But the submarine crew of the I-16-tou, however, was never found.

Then in present-day Hawaii U.S. Navy investigators Lieutenant Commander Christopher Pastwa and Lieutenant Karen Yamura puzzle over a mysterious skeleton unearthed in Kailua. When it is confirmed to be one of the submarine's lost crew, Pastwa and Yamura begin to unravel a dark secret lurking at the heart of their beautiful island. This member of the crew might be confirmed dead, but what happened to his shipmate?

He may be a chameleon, hiding in plain sight.

Author Bio: About the Author, Marcus A. Nannini:

Marcus Nannini began his journalistic career when he published his own newspaper in the sixth grade, charging twenty five cents for the privilege of reading the only printed copy of each edition. During his undergraduate years Nannini was a paid reporter and worked three semesters as the research assistant for journalism professor and published author Richard Stocks Carlson, Ph.D.

Nannini is a history buff with a particular interest in World War II. As he began to make friends with some veterans he researched their stories. The result was a series of interviews leading to the soon to be published World War II anthology: Dinner with Himmler.

His World War II mystery/thriller, Chameleons, An Untold World War II Story is œVery Highly Recommended  by the Midwest Book Review and has been deemed by Publishers Weekly to be among œthe very best. 

Additional titles from Marcus A. Nannini:

Commander Christopher Pastwa and Lieutenant Karen Yamura find themselves going in all directions when one of their own turns up as the victim of a torture/murder on a Kona coffee farm located on the beautiful island of Hawaii. As the body counts increases and the loose ends multiply, Admiral Roman Reardon decides to take a more hands-on approach and joins the team in Hilo where they work closely with Leilani Fuchida, the County Medical Examiner.

Ensign Gary Kida 's wedding serves as a reunion of sorts and provides the team with a short respite. But the emergence of a pair of shady characters Reardon met a few years earlier, Cy and the œAussie,  appears to tie into the continuing string of murders. Pastwa corners a small group of traitors and guns most of them down, save one, and he holds the key to the underlying plot. However, it may prove to be too late to prevent a Pearl Harbor Remembrance Day helicopter attack on the U.S.S. Abraham Lincoln as she sits in Pearl Harbor, her decks loaded with dignitaries and her entire crew.

An international incident is brewing when a dead Australian Royal Navy officer is discovered chained to Captain Cook 's Monument by an Australian Navy maintenance crew. While Doctor Fuchida attempts to gain access to the corpse, aggressively guarded by Royal Marines, Admiral Reardon lands his helicopter on the Australian cruiser and discovers an old friend of his is in charge.

Commander Christopher Pastwa and his entire team, along with newly assigned members, again find themselves dealing with more dead bodies than they can count, unaware it is all a deadly diversion. While the œAussie  grabs their attention, Cy, the leader of a clandestine group of mostly American citizens, is plotting with the skipper of a stealthy North Korean submarine to commit one of the worst terrorist attacks in history.