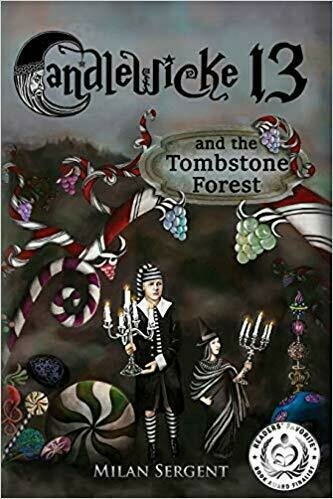 Candlewicke 13 and the Tombstone Forest - Fantasy


Book Synopsis: Just when Valor McRaven and his sister, Doomsy Gloomsy, are minutes from becoming apprentices of magic at Mystic Steeples, their parents snatch them away in an escape from the sanatorium with two nutty Nizzertits they have befriended.
Valor and Doomsy find themselves fleeing Hoopenfangia all the way to the Bumbling Boonies where Valor’s father plans to live in a hole in the ground in order to escape the Grim Warlock’s Thirteenth Hour—if Houmas McRaven can get his family through the enchanted door of the Ambergis Divide, that is.

But has Houmas led his family into the very pit of danger and death, he had imagined escaping? Will Valor’s friends show up after the war that ignites the Thirteenth Hour traps him and Doomsy in its sticky web?

Come along as Valor and Doomsy encounter magic creatures, a tombstone amusement park, and a tower of sorcerers, while unraveling more clues to the mysteries surrounding the McRavens.

The Tombstone Forest, the second book in the CANDLEWICKE 13 series, contains hidden clues throughout the novel. It also contains chapter illustrations as well as a variety of maps.


Author Bio: Multi-Award-Winning Author Milan Sergent studied creative writing in college and began writing the novel series "Candlewicke 13" in 2007, a year after featuring some of the series' characters in his solo art exhibition, titled "Outsiders and Apparitions," near Rockefeller Center in New York City.

An artist and poet since adolescence, a few of Sergent's works were published in Scarlet Literary Magazine.

He lives with his wife, Rebecca, in Mississippi but considers New Orleans his second home. To learn more about the author or view the illustrated companion guide to the Candlewicke 13 series visit www.milansergent.com. While there, join the mailing list for important news updates and notifications about future novel releases.