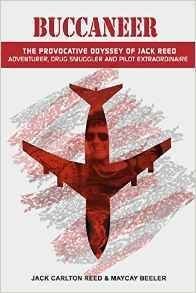 Book Synopsis: My jaw dropped when I first heard his story. Never dreamed I 'd become a character in it. Have you ever had a feeling so strong you couldn't ignore it? Call it intuition or inner voice of reason barking in your ear to take immediate action on something you couldn't possibly understand at the time? I have. And when I acted on it, it changed my life and that of an infamous prison inmate. This is our true story.

œBuccaneer-The Provocative Odyssey of Jack Reed- Adventurer, Drug Smuggler, and Pilot Extraordinaire  is the never-before-told stunning true crime tale of a convicted Medellin Cartel cocaine pilot/smuggler. As best friend and co-defendant of drug baron Carlos Lehder, associate of Pablo Escobar, Jack Reed becomes the victim of a tragic judicial sentencing mistake in a historic trial laden with hype. The media circus that follows contributes to the longest most publicized drug trial in U.S. history. Judicial misconduct runs rampant. What happens to this prison inmate will make you weep and smile in this award-winning biography. Fans of Netflix Narcos may be surprised by this raw personal account. Not what the media led us to believe!

Author Bio: MayCay Beeler is a vivacious American Record-Breaking Pilot, TV Personality/Journalist, Best-Selling seven time Award-Winning Co-author of "Buccaneer", and FAA Chief Flight Instructor smitten with the wild blue yonder. "Buccaneer" is the never-before-told tell all of convicted Medellin Cartel pilot/smuggler Jack Reed who refused to talk to cops and press until MayCay contacted him in prison. His infamous story has never been given to any other journalist.