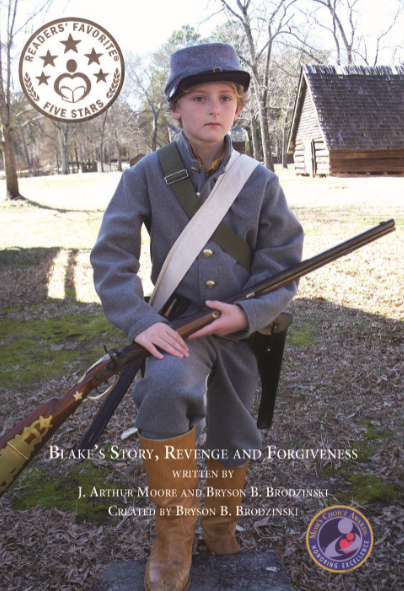 Book Synopsis: As the story opens, friends ride up to announce that war has been declared. Micah and his friends raise two companies of infantry. The one, with Micah, goes to help a friend in Tennessee and departs for the war. The family learns of the father's death at Shiloh and the wounding of the drummer boy, Tyler Chase, and Blake vows to go to the war and kill the Union soldier who killed his father. He works to learn how to play the drum. Blake's uncle runs a freight business and sends supplies to the army. Blake sees his chance and runs away to the war by hiding in a supply wagon. Discovered hundreds of miles later and taken into the 2nd Tennessee as a drummer, he enters the war riding courier. Blake witnesses war for the first time in all its horror as his clothing is pierced by bullets and many around him are wounded and killed, and experiences the hard life of an army on the move in a landscape parched by drought and temperatures in the 90's. Assigned courier duty for General Joseph Wheeler, Blake rides with the cavalry at Perryville, where he is shot from the saddle and recovered by 18-year-old Union soldier, Matthew Mills, who with his friend tries to help him, and conceal his identity. Matthew hates the war and the killing, and after killing his first enemy soldier, can not bring himself to ever do it again. They manage to enlist Blake into their 31st Indiana Regiment, where he is assigned with the musicians. Over the course of the next few months, the regiment experiences the hardships of moving without personal gear and tents as it travels cross country in 90 degree heat to freezing snow, finally arriving in Nashville in early November to establish winter camp. Following the bitter and bloody battle at Stones River, the regiment moves eight miles east and sets camp at Cripple Creek. There, Blake learns that the 31st had been at Shiloh, in the same part of the battle as his father. Knowing about Matthew's previous experience, he begins to wonder if it was Matthew who killed his father, but he couldn't hate him. Accepting that neither really belongs in the war, the lieutenant arranges for Matthew to take Blake home. During an evening conversation sharing their experiences, Matthew suddenly wonders if it was he who killed his friend's father. Upon returning home to the joyful reunion with his family, having thought him dead; and realizing that the following day is his birthday; a party is planned. When Tyler arrives and is introduced to Matthew, he is shocked. �Blake, he killed your pa!� �I know. He knows I know. We have both known these past weeks. He was a soldier and did as he had ta. Now he's like a brother ta me. I've forgiven him.

Author Bio: A graduate of Jenkintown High School, just outside of Philadelphia, Pennsylvania, Moore attended West Chester University. Upon graduation, he joined the Navy and was stationed in Norfolk, Virginia, where he met his wife to be, a widow with four children. Once discharged from the service, Moore moved to Coatesville, Pennsylvania, began his teaching career, married and brought his new family to live in a 300-year-old farm house in which the children grew up and married, went their own ways, raised their families to become grandparents themselves. Retired after 42 years, Moore has moved to the farming country in Lancaster County, Pennsylvania, where he enjoys the generations of family, time with his model railroad, and time to guide his writings into a new life through publication. It also allows for the opportunity to participate in a local model railroad club as well as time for traveling to Civil War events and presenting at various organizations and events about the boys who were part of that war. He also helps to organize an annual Civil War living history encampment, shares the process of writing and readings from his work, and does book signings at a variety of locations.